Koepka the King in Turkey

IAN POULTER was left cursing a third round of 75 as he lost the Turkish Airlines Open by a single shot to the brilliant young American, Brooks Koepka.

After two rounds, Poulter had a six-shot lead but he lost his timing and rhythm during the third round and ended up going into the final round trailing Wade Ormsby by a shot.

Koepka claimed his first European Tour title in Antalya, a result which ensured Rory McIlroy won The Race to Dubai for the second time in three years without playing in any of the Final Series tournaments.

The American carded a flawless closing 65 at the Montgomerie Maxx Royal to finish on 17 under par, one shot ahead of Poulter, who missed a birdie putt from six feet on the 18th to force a play-off. 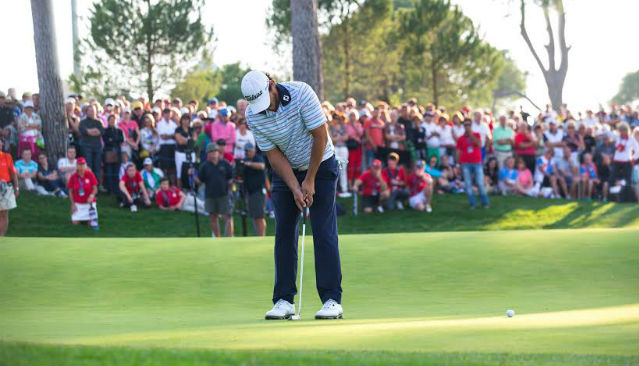 Marcel Siem, Jamie Donaldson or Sergio Garcia needed to win in Turkey and at next week's DP World Tour Championship, Dubai to have a chance of overtaking McIlroy.

And although Siem started the final round just one shot off the lead, the BMW Masters winner could only card a closing 71 to finish joint eighth, with Donaldson 19th and Garcia 25th.

Koepka, who won three times on the Challenge Tour last year to gain promotion to the European Tour, had four birdies on the front nine and holed from 40 feet for another on the 10th, before a brilliant approach to the 13th set up an eagle from just eight feet.

That gave him a two-shot lead and although Poulter halved his deficit with his fifth birdie of the day on the same hole, the Ryder Cup star was unable to find another on the last despite a superb long greenside bunker shot.

Poulter has had a miserable season, rescued only by being a member of Paul McGinley's winning European Ryder Cup. He received a captain's pick and arrived at Gleneagles at the centre of attention on account of his wonderful record in the event. In truth, he was a member of the supporting cast in Scotland, and desperately wanted to win in Turkey to give his season a gloss finish. It was not to be.

Koepka was thrilled with his success at a tournament that launched the career of Frenchman Victor Dubuisson. He will now be hoping to follow in Dubuisson's footsteps and has been widely tipped to become one of the game's superstars.

"The Final Series is what you prepare for all year, so to win one of them is very special, and I hope I can carry it onto Dubai next week," he said. “I feel like I’ve been playing really well recently. I’ve been knocking on the door for these last two or three months, I’ve been very close and I feel like I should have

won a couple. But I’ve learned something new every time, and I used that today. I was very relaxed, very calm today, and I guess it showed.

“To look where I was a year and a half ago on The Challenge Tour, to now be a winner on The European Tour is incredible.”

Poulter was clearly disappointed but tried to put a brave face on things. “I missed a couple of opportunities coming in. That was the difference, a couple of putts here and there. I can look back and add them up, and there were plenty," he said.

“I played some good golf this week, but to play a bad round on Saturday is a bit inexcusable. There are good players out here week in, week out, and you need to play well for four rounds of golf.

“But there are still a lot of positives to take from the week. As bad as 2014 has been, the last two weeks have been pretty good. For me to play well over this stretch of tournaments with new equipment in the bag is very pleasing.”

There was a sad footnote to the tournament, with Robert-Jan Derksen playing his 394th and last European Tour event after calling time on his professional career following the final round of the Turkish Airlines Open.

The Dutchman won two European Tour titles in a pro career spanning 18 years, with his victory in the 2003 Omega Dubai Desert Classic – where he closed with a round of 65 to beat Ernie Els by one shot – the  highlight of his time on the top tier.

The 40 year old spent 15 full seasons on The European Tour, finishing a career-high of 36th in the Money List in 2007.

An aviation enthusiast, Derksen was presented with a personalised miniature aeroplane by Richard Hills, the European Tour’s Ryder Cup director, and he will now take a complete rest for the next six months before deciding which new career path to take.

Derksen said: “It’s been a fantastic 18 years. I had my share of good fortune and wins. I feel it’s time for a change, and that change might mean something else in golf, or it might not mean something in golf at all. But I’m sure it will be something good, and I’m already looking forward to the next stage of my life.

“To finish in these circumstances, with a birdie on the last hole of one of the best tournaments on the European Tour in sunny weather, that’ll do nicely for me. I’ve got a big smile on my face now, and I’m sure it’ll stay there for a while to come."

Koepka was clearly impressed by the set-up in Turkey - , “The Maxx Royal really is an unbelievable place, everything is first class. To Ben Lovett and his green keeping team, I speak on behalf of all the players when I say how great the golf course has been this week.”

Koepka’s comments were further echoed by Turkish Airlines Open Tournament Director, Miguel Vidaor, “The second edition of this magnificent event has been a resounding success, in spite of the weather challenges we faced earlier in the week, I would like to personally thank everyone at The Maxx Royal for an outstanding collective effort that has really raised the bar on what we achieved last year. The course condition has been impeccable and the players have been united in their praise for this spectacular venue.”