Golfers across the North East have taken part in the region’s biggest amateur golf tournament this weekend.

19 year old Sam was the eventual winner at the prestigious tournament, now in its third year, after coming back in 3 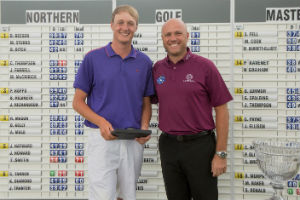 under par on the back 9 to secure the victory by 1 shot. His final score was a 3 under par 69.

This is Sam’s second recent victory having won the Eaglescliffe Club Championship and the teenager also plays in the County Durham men’s team.

Rockliffe Hall’s James Rogers came second in the NGM with a 2 under par 70 – he’s one of the region’s great prospects at only 18 and is a regular in the County Durham junior team.

The NGM third place went to Callum Tarren, also of Rockliffe Hall, who ended on 1 under par after a round of 71.

As the County Durham resort prepares to welcome some of the world’s biggest golf stars for the European Tour English Senior Open in August, amateur golfers were given the chance to play the same course at the NGM.

Category one golfers from across the North East, North Yorkshire and Cumbria took part in the tournament and represented their individual clubs.

Rockliffe Hall’s course was set the same as the English Senior Open to give golfers a real flavour of what it’s like to play in a top competition on a world class course.

The scratch tournament is aimed at category one golfers and adopts the format of a professional tour event. Prizes are awarded for first, second and third place.

Head PGA professional at Rockliffe Hall, Jon Stacey, said: “The golf club at Rockliffe Hall is really putting the North East on the golfing map thanks to not only massive world-class tournaments like the European Seniors, but also these amateur competitions which are vital for golfers at this level. This year’s Northern Golf Masters was even more exciting as we set the course exactly how it is for Seniors Tour which all those taking part found really challenging. Congratulations to the tope three guys who played an impressive game.”
The English Senior Open takes place on August Bank Holiday weekend (Friday 22nd - Sunday 24th). Former Ryder Cup captains, Ian Woosnam OBE, Mark James and Sam Torrance OBE have confirmed they will go head-to-head, along with other major names in European golf Costantino Rocca, Barry Lane, Des Smyth, last year’s winner, Steen Tinning, and Paul Wesselingh, who won last year’s Order of Merit.

Rockliffe Hall’s world-class golf course is recognised as one of the best in the UK and was strategically designed by top golf architect, Marc Westonborg from Hawtrees. Thanks to its engineering and construction, the course remains open all year round and benefits from no winter greens.

Tickets for the English Seniors Open at Rockliffe Hall can now be bought for just £10 (under 16s free) by visiting www.englishsenioropen.com or calling 01325 729999.