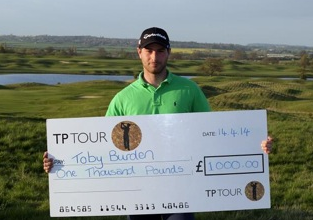 courses. TP Tour is the fastest growing UK Tour, and has staged over 85 tournaments throughout England since 2011.

List of Winners and Scores on the TP Tour so far this season ;

The Addington event on Monday 7th April featured no less than 9 European Tour winners, and in runner up position was Nick Dougherty, who returned a fine score of 66.Scotland’s Raymond Russell was third with a 68.

The Tour is expanding its reach in 2014 to take in other top venues, including one of the world’s finest, Loch Lomond, and Cheshire’s Delamere Forest.

Farmfoods will be the title sponsor of the TP Tour event at Robin Hood Golf Club in Solihull, May 22nd. Spectators Welcome.

The £100,000 Farmfoods British Par 3 Championship at Nailcote Hall, is a firm favourite with UK golf fans, and is once again the biggest prize fund event in the UK outside of the European Tour, hosted by double major champion golf legend Tony Jacklin.