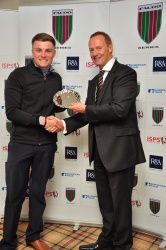 Ben Brewster of Bawtry won the Faldo Series England North Championship with a playoff victory over Hexam’s Matty Lamb at Moortown Golf Club in Yorkshire. Brewster and Lamb could not be separated after 54 holes of regulation play, both finishing at five-over par on 218 before Brewster birdied the first extra hole to capture the overall title.

18-year-old Brewster setup a second Faldo Series Grand Final appearance by winning the Boys’ Under-21 division, whilst Lamb, who birdied the 18th to pip Oliver Clarke to the Boys’ Under-16 title, will make his debut at The Greenbrier in West Virginia, USA next October.

Alice Hewson of Berkhamsted posted rounds of 78, 74 and 72 to win the Girls’ division by six shots and book her spot in the 18th edition of the Faldo Series Grand Final alongside Brewster and Lamb.

The final two qualifying spots went to 2012 Faldo Series Champions Rochelle Morris (Woodsome Hall) and Jack Singh Brar. Rochelle beat West Lancashire’s Eloise Healey in a playoff to finish runner-up in the Girls’ division whilst Jack won the Boys’ Under-18s by two shots from Bath’s Jamie Li. 17-year-old Singh Brar from Remedy will line up in his fourth Grand Final in October, having finished 1st, 2nd and tied 10th in his previous three starts at Lough Erne, Mission Hills and The Greenbrier.

Supported by The R&A, ISPS Handa, The European Tour and The Greenbrier the 2014 Faldo Series Europe schedule features 17 tournaments in 15 countries including three in England plus others in Abu Dhabi, Ireland, Chile, Wales, Brazil, Scotland, Czech Republic, Italy, Austria, Netherlands, Germany, Poland, Slovakia and the USA.

In September 2014, Faldo will begin taking students at a full-time residential academy for education and golf development in America.  The first ever Faldo Series Academy in Casa Grande, Arizona marks another significant step in the programme’s history.