Miguel Angel Jimenez, who is 49, is bidding to become the oldest winner of The Open, replacing Old Tom Morris, who 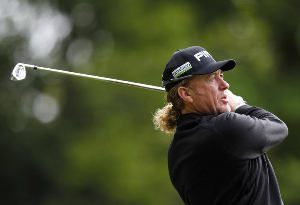 Meanwhile Tiger Woods will be hoping to get his own bid to make golfing history when he resumes his pursuit for a 15th major..

Tiger Woods has won 14 majors - he led going into the final round of each one. The only time he has lost a 54-hole lead was when Y E Yang beat him to the US PGA championship in 2009. Woods has never won a major when trailing going into the final round.
Woods' last major victory came at the US Open in 2008 when, despite a broken leg, he beat Rocco Mediate at Torrey Pines. All square after 72 holes, they still couldn't be separated after an 18-hole playoff. Woods finally put his many away on the 91st green. There have been 19 majors since that victory. Previously, his longest spell without a major was 1997-99 and 2002-04, when he played 10 without winning.