The coldest winter in 50 years has given award-winning golf club rental company ClubstoHire.com a major boost as bookings by British and Irish golfers across the Mediterranean’s most popular destinations are up strongly on the same 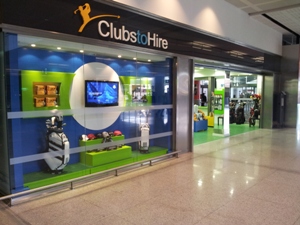 As domestic temperatures plunged as low as -15C in February and average sunshine was nearly 20% down on average for the time of year, so last minute bookings to warmer climates by golfers looking to start their season increased significantly over the past three months.
Bookings with ClubstoHire.com have been particularly strong for golfing destinations in Portugal, Turkey (Belek) and Spain, where the company recently opened two more stores at Barcelona and Girona airports. It took the total of ClustoHire locations to 16 – from Faro in the west to Belek in the east.
“As they decide to get away from the cold and book a budget airline to take them to a warmer climate, so many more golfers are realising the benefits of hiring clubs from us and avoiding the heavy luggage charges,” said CEO Tony Judge. “And with sets starting from €35 for a week, they represent great value as well as convenience,” he added.
The company recently re-launched its website (clubstohire.com) and expanded its golf club offering, with brand new sets of Mizuno JPX-825 clubs available at Faro and Malaga airports. The latest clubs from other leading manufacturers such as TaylorMade, Callaway, Mizuno, Wilson and MD Golf can be hired at all 16 European stores.
ClubstoHire warm-weather locations also include Lisbon; Murcia; Alicante; La Linea/Gibraltar; Tenerife and Palma, Majorca.