The 24-year old South African rising star secured his 2012 European Tour card at Qualifying School and went on to enjoy the very best of starts to his year, capturing his maiden title at the Joburg Open. The following week he won the prestigious Volvo Golf Champions defeating his idols Ernie Els and Retief Goosen in a play-off. He finished the season sixth in The Race to Dubai having also captured the Volvo China Open title and the coveted Alfred Dunhill Links 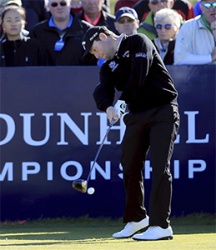 Grace had a glittering amateur career, winning many titles including the 2006 South African Amateur Stroke Play Championship and was a graduate of the Ernie Els and Fancourt Foundation, like so many of the leading South African players. He turned professional in 2007 and after learning his trade on the Challenge Tour and European Tour, has spent the last 12 months underlining his potential as a major contender.

Grace, who added to his title haul winning the 2012 Vodacom Origins Final on the Sunshine Tour, explained his decision to sign with IMG five years after turning professional, commenting, “Last year was fantastic for me on course. I know it will be a tough ask to match the five victories but I want to keep up the momentum. I really found my feet on the European Tour last year and, for now, I plan to keep my focus there while playing as much as possible on the Sunshine Tour and also to gain experience in the States to ensure I give myself the best possible chance in the big tournaments.”

Grace continued, “I believe the global nature of IMG will be invaluable as I play on three Tours around the world as well as being able to help me strike the right balance on my schedule.  I will be able to focus on my golf while IMG take care of everything else. They have looked after a lot of golf’s major players so hopefully I will benefit from their experience as I look to build on what I have achieved so far.”

Guy Kinnings, Global Head of IMG Golf who also manage Grace’s countrymen Ernie Els and Retief Goosen, added, “We are delighted that Branden has chosen IMG to manage all aspects of his golf career. While his achievements on course have been remarkable, they are certainly matched by his likeable personality and marketability off course.   The global nature of our company with its very personal service means that we are perfectly equipped to represent Branden around the world in all aspects of his career. We look forward to working with him in what I hope will be a long and mutually beneficial partnership.”

Branden Grace will be managed by Duncan Reid out of IMG London with support from Rosie Vickers, Jacques Retief of IMG South Africa and Andy Dawson of IMG US.

Duncan Reid added “Branden is one of the most impressive young golfers in the world right now. He manages to balance his competitiveness and ambition with a fun-loving attitude and great modesty away from the course. It’s going to be exciting working with him and I’m delighted to be part of his team”