Ricardo Santos is the European Tour 'Rookie of the Year'

Ricardo Santos has been named 'Sir Henry Cotton Rookie of the Year' for 2012. Santos has enjoyed a successful year on tour claiming a maiden victory on home soil at the Maderia Isalnd Open. He gained his tour card in 2011 following a sparkling season on the Challenge Tour.

Throughout the 2012 season Santos has been a Titleist ambassador and used Titleist equipment to secure his Maiden victory His 22-under par winning total was a new tournament record and his final round 63 remains the lowest final round by a winner during the 2012 season. Santos trusted a host of Titleist equipment to become the only 2012 European Tour Rookie to enter the winners circle, including the Pro V1x golf ball, 910D3 driver, 910H hybrid, AP2 and MB 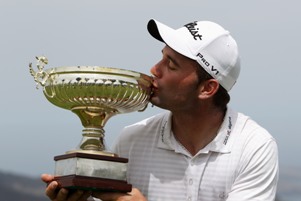 Santos becomes the first ever Portugese player to win the award and was clearly delighted with the recognition:

“It’s an honour to become the first Portuguese player to win the Rookie of the Year award. When you look at some of the players who have won the award in the past, it’s a real privilege to see my name alongside theirs on the trophy.

To capture my maiden victory in my home country and then to round the season off by winning this award is more than I could ever have dreamed of.”

Santos is supported by Oceanico which own and operates some of Portugals finest courses. Including the home of the Portugese Masters, The Victoria.  CEO Chris Sitwell had this to say about Santos:

“Ricardo is a true gentleman and we are absolutely thrilled that his hard work, dedication and natural talent has led to this momentous accolade. He has been a magnificent ambassador for Oceânico Golf, and having honed his game from an early age at our world-renowned golf resorts, has undoubtedly become a figurehead for the development of golf at grass-roots level in Portugal. This Rookie of the Year award has propelled so many past-winners on to the highest echelons of the game and I have no doubt we have yet to witness the best of Ricardo.”

Santos himself was quick to recognise the contribution that Oceanico have made to his career:

“I am extremely fortunate to have great sponsors who I would like to thank  collectively for their incredible support over the years as I progressed towards earning my full European Tour playing privileges,” he went on to add. “The team at Oceânico Golf, in particular has played an instrumental role in me standing here today at the culmination of what has been a truly amazing season. Their unwavering support and free reign to use the incredible facilities that are so popular with golfers from across Europe, has given me tremendous belief and confidence to fulfil what I hope to be the first chapter of my career.”