“It was a great experience to spend time with Henni who played in the Faldo Series for several years, was a member of Team 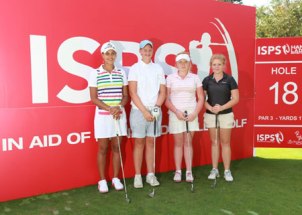 Faldo and finished third on the LET the day before,” said Amber Ratcliffe of Royal Cromer Golf Club.  “We are all thankful to Sir Nick and ISPS for this opportunity.  We now see what it takes to become a LET player”.