Course record 62 helps Maddy to victory in the Veka Open

De Vere Wychwood Park, one of the country’s leading championship golf courses, hosted the PGA EuroPro Tour this weekend, as some of Europe’s best young golfers gathered to contest the Veka and Network Veka Open. The tournament was won by Cambridgeshire’s Paul Maddy, who finished the three-round event at 10-under par for a two-shot victory over Scott Fallon from North London. Maddy entered the final round with a two-stroke lead following a blistering second round course record of 62. With victory he picked up the winner’s cheque of £10,000 and climbed to third place in the Order of Merit, in line to claim one of the five Challenge Tour cards up for grabs at the end of the season. Players and sponsors were quick to praise the impressive venue, which will host the European Tour Qualifying 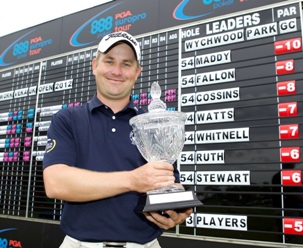 “We’ve witnessed some fantastic golf this week, especially from Paul, whose second round 62 was a remarkable performance,” noted Jon Farmer, Head Professional and Golf Manager at De Vere Wychwood Park. “The tournament was a resounding success from start to finish and the ideal way to begin what is a busy couple of weeks here at Wychwood Park. The course is in phenomenal condition and received rich-acclaim from all the players. We’re looking forward to welcoming the European Tour Qualifying School, which kicks off next month.”

Maddy entered the week on the back of a second place finish in his last EuroPro Tour event, yet his record-breaking performance came as a surprise to the Gog Magog native:

“On Thursday morning I walked onto the course with no expectations, but I got some momentum with a birdie at the first and then it was a case of taking the opportunities when they came. It was obviously my day. For most of the round I wasn’t thinking that something special was on, but then I managed to birdie the hardest three holes on the course, 13, 14 and 15, and I capped it off with an eagle on the last.”

For further information on The De Vere Club please visit www.devere.co.uk/golf or call 0844 980 8060