So I'm sure many have been in this situation, for me it may have taken longer than usual 3 years in fact due to not being a club member, to play in your first competitive round of golf.

I had played in friendly rounds, sometimes with up to 15 people with the old £1 front, £1 back and £1 overall type of thing but when I went to play in my first proper competition round it was completely different. 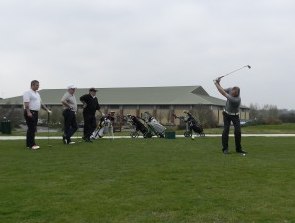 I was taking part in the first event of the Golf Days UK (www.golfdaysuk.co.uk) 10 event Order of Merit competition, on their Essex Tour, which was taking place at the Essex Golf and Country club in Earls Colne, just outside Colchester.

My first competitive event was on a Sunday afternoon (all events run either Friday or Sunday) on a golf course I knew well having  played it 4 times previously.  I was nervous, I believe nerves are good, I'm told they generate from excitement. Excited I was too.

Arriving early ensured I wasn't rushed and had plenty of time to hit some balls on the range and jump on the putting green before heading into the clubhouse to the Golf Days registration area.

I'd never met any of the Golf Days UK team before but had spoken to them on the phone and had exchanged various tweets prior to the competition so I felt like I knew them already. They were very relaxed, seasoned pros in running events such as this which made an excellent welcoming atmosphere.  I collected my score card and headed to the first tee where I met with the other 2 golfers in my 3 ball.

I had asked to be put in the same group as a good friend of mine Steve (coincidently it was also the first time I had played with Steve too) I felt this made me feel more relaxed and more comfortable with a situation that was quite frankly, alien to me.  I explained to them both that I was nervous, I told them that this was my first competitive round of golf. Steve had been a member at his current club for 8 years the 3rd chap, Kamal, had played in some of the UKs biggest amateur golf tours both, compared to me, highly experienced.

What happened on the first tee amazed me. After swapping cards (again, little thing but for me this was new territory) I said I don't mind teeing off first, it's something I always try to do. The longer I think about that first tee shot, the more chance it will go wrong. I didn't catch it too well but I was away, down the first fairway. After that I crumbled. Was I too nervous? Was I too excited? Was I too confident in the course I know better than my playing partners? Was I trying too hard? Try too hard to impress my playing partners? Who knows the answer to that. What I do know is that I crumbled.


I don't recall much of the rest of the round of golf, it went downhill after the first tee shot. I came away with a very disappointing 13 points off my 3/4 handicap of 15 but I had done it, played my first competitive round of golf.

I do remember Steve and Kamal pulling me up on a thing or two as I went round, not rule breaking, more  etiquette. I had no problem with this at all it was done in the right way, in fact I think they were more than happy to point these things out to me.

For me I learnt a lot. It's the best way to learn. I feel if I hadn't explained the situation at the start of the round they may have looked at things slightly differently.

It's a big step to take. Once you do it you'll never look back and I'm sure there are folk who have played more competitive comps than what you care to think about but remember everyone has a first.