DARREN CLARKE joined a pretty elite club when he became only the fourth man to add the Senior Open to the Claret Jug he won at Royal St George’s in 2001.

The Northern Irishman holed a birdie putt on the final green to win the Senior Open in a rain-affected Senior Open at Gleneagles to avoid a play-off against his old Ryder Cup team-mate Padraig Harrington. 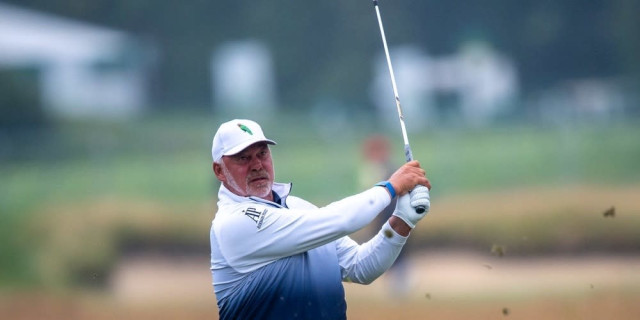 After a poor front nine Harrington clawed himself back into contention with a final round 67 to post a nine-under total.

The three-time Major winner made the turn in 37 after a bogey at the seventh and another dropped shot at the ninth, but he tore up the famous course coming back, shooting six birdies to take the clubhouse lead with Clarke on the 16th.

Clarke struggled in the final round, with play was suspended due to torrential rain. He shot nine pars  on the front nine before carding a bogey six at the 10th, cancelled out by a birdie at the 12th.

On the 17th tee he knew he had two holes to find a birdie or face a play-off against his old pal Harrington. He could only par the penultimate hole so it was on to the par-five 18th, where he had recorded a birdie in each of his first three rounds.

As darkness fell, Clarke found the front fringe of the par-five with his second shot. He rolled his eagle putt close enough and when playing partner Paul Broadhurst missed his putt he knew his tap-in birdie would seal a Senior Open to go with the Open he won in 2011.

Who is Darren Clarke

Darren Clarke was born in Dungannon in August 1968. His crowning glory came in 2011 when he won The Open at Royal St George's. Clarke turned professional in 1990 and won the first of his 11 DP World Tour titles three years later. He also won two WGC titles and enjoyed three victories on the Japanese Tour. He has won four times on the Champions Tour. he played in the Ryder Cup five times and captained Europe in 2016.