99 of the top 100 players on the LPGA’s Official Money List have assembled at Congressional Country Club for a Women's PGA Championship that is already the biggest yet.

Sponsor KPMG has partnered with the PGA of America to double the prize fund for this year's event from $4.5 million to a significant $9 million with the winner taking home $1.35 million. This also represents a 300% rise since 2014 ($2.25M), the year before the PGA of America and KPMG began staging this championship together.

Defending champion Nelly Korda has recovered from a blood clot in her arm and has already shown impressive form since that comeback, finishing inside the top ten at the US Women's Open and most recently losing a playoff to Jennifer Kupcho at the Meijer LPGA Classic on Sunday. Ireland's Solheim Cup hero, Leona Maguire, was also part of those extra holes after a brillinat final day rally. 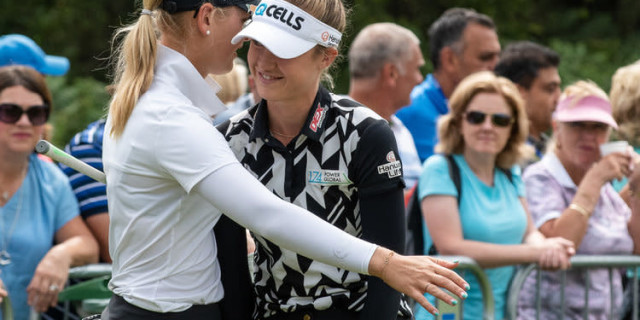 Minjee Lee won the most recent of those majors earlier this month at the US Women's Open and the prodigious Australian is arguably the most prominent figure to beat this week in Maryland.

World number one Jin Young Ko is naturally another standout, even if the South Korean has ceded headlines of late to the likes of Lee, Korda and Kupcho. Nonetheless, the 26-year-old is more than capable of transforming a relatively (by her standards) lean few months into a third major success.

Likewise, Lydia Ko is ready to cross that line in a major again - having already posted six top ten finishes this season, including a win in February. The New Zealander has found a serenity on and off the golf course and results are reflecting that calm but determined mindset. Given she is only 25, it's unfathomable that the most recent of her two majors came six years ago.

Lexi Thompson has been quietly progressing throughout 2022 and is second on the LPGA's scoring average. This patriotic American would love nothing more than to secure a major in the shadow of Washington DC. Kupcho is another US star who is enjoying a breakthrough campaign and will expect to contend here. Canada's Brooke Henderson is a recent winner on the tour and claimed this title six years ago.

Many will recall Congressional for its men's US Open history with Ken Venturi, Ernie Els and Rory McIlroy lifting the national title at this venue, but things are significantly different from those seemingly halcyon days, as architect Andrew Green has revamped the entirety of the layout, with only the routing and par of each hole retained from when we last saw it at this level. The 'New' Blue Course at Congressional is an upgrade in every sense and the perfect setting for the best players in the world to compete.

Align the deep riches of the prize fund and the quality of a venue - this is a stage befitting a major championship.