Golf Is Good For You - Except When It Isn't

Golfshake writer Derek Clements reports on the pressure that we face in golf but in particular the pressure for the tour players plying their trade around the world. 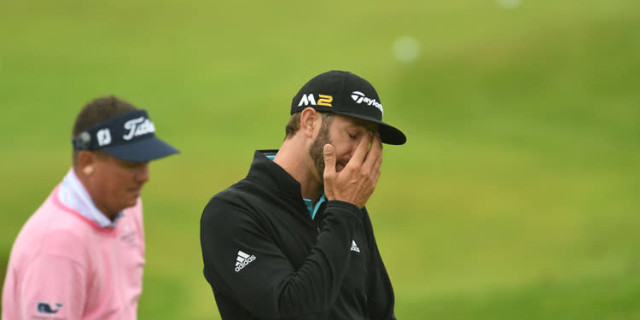 HANDS up if you missed playing golf during what seemed like never-ending lockdowns last year and again at the beginning of 2021. I am guessing that almost all of you suffered withdrawal symptoms and dreamt of the day when you could finally get back out there and start hitting balls again.

This sport that we all love offers us the opportunity to socialise, to enjoy regular outdoor exercise and be at one with nature. It is good for us both physically and mentally.

On the face of it, life as a tournament pro is a pretty glamorous existence. They get to play the best golf courses in the world, stay in the best hotels, compete with the sun beating down on them and travel to some of the most beautiful and exotic places on earth while competing for vast sums of money. Hideki Matsuyama picked up more than $2m for winning The Masters, as well as all sorts of bonuses from his sponsors.

But there are plenty of downsides too - staying in hotels is not all it is made out to be. Staring at four walls, eating alone or with the caddie you spend most of your life with may not be quite as appealing as you think. Endless travel is exhausting, especially when it involves crossing time zones. And, of course, perhaps biggest problem of all is that if you happen to be married and have school-age children you could go weeks without seeing them in the flesh. Zoom calls are fine but nothing comes close to physical contact with loved ones.

And not everybody picks up $2m winner’s cheques either. Just imagine how difficult life is if you are stuck in a slump, missing cut after cut, trying to hold on to your Tour card while having to fork out for hotels, air fares and caddies’ fees. It is a very expensive business that can lead to all sorts of mental health issues.

Chris Kirk and Ken Green are just two high-profile golfers who have succumbed to depression, alcoholism and drug dependency. It takes a special kind of man or woman to keep going when the game you have loved all your life deserts you.

John Catlin, a three-time winner on the European Tour, admits that he came within a heartbeat of quitting the sport. He only stuck with it because he realised that he had nothing to fall back on. And it was when he was at his lowest that he turned up at a tournament and, from nowhere, managed to win. He hasn’t looked back since. But, like Kurt Kitayama, he is an American who is plying his trade on the European Tour - these are two young men who spend the vast part of their lives away from their homeland and their families.

And recent research into the mental health of leading golfers has found it has been affected because they are spending more time on the road, resulting in loneliness and relationship breakdowns. The divorce rate among tour pros is disproportionately high when compared with other professions.

Dr John Fry of University Centre Myerscough interviewed 20 professionals, including Ryder Cup players and a former world number one, who spoke of the stress they suffer as result of the amount time they spend playing and travelling for a sport they grew up loving.

It is hardly surprising. In 2019 there were 46 events on the European Tour in 32 countries, compared to 28 countries in 2014, and 27 of those were held outside of Europe, in countries such as Australia, China, Qatar, Saudi Arabia and South Africa. The amount of travel involved for anybody playing a full schedule is immense, and that is bound to take its toll.

“Pro golfers are spending more time on the road, which leads to a range of stresses and insecurities that can impact negatively on their mental health and wellbeing,” Fry said. “Players increasingly spend large periods away from any friends and family, and struggle to form anything but superficial relationships with others on tour.

“Pro golfers needed each other’s help to alleviate the stresses of life on tour, but at the same time, relationships were often tainted by tension, conflict and rivalry.

“Many golfers experience loneliness, isolation, low social support, high psychological demands, and high job insecurity during various points of their career. They often feel they can’t talk openly about these concerns. Beyond the glitz and glamour is a reality where many pro golfers experience a variety of mental health and wellbeing problems.”

One golfer with six European Tour titles to his name, told Fry: “I don’t see my kids that much – they are too old to travel now, to be able to skip school. I miss my wife, my kids, my parents. I don’t see them enough, and that’s what is difficult.”

Another European Tour winner said: “As I got more kids it got harder to say cheerio at the airport. I made sacrifices in terms of family life – I missed out on a lot of family barbecue type of stuff, and a few school events. It affected my kids in the school – I think they missed out on me being there, school sports days and stuff like that.”

One player who had won three main tour events and one Major said that golf “can be the most wonderful life in the world but it can also be the most difficult. It can just be a lonely game. It can be gut wrenching, furious at times. It can get to a point where you don’t like who you are”.

A European Tour player said: “I am not surprised that many professional golfers get divorced because it can put a lot of pressure on partners.”

And while the income of the top European Tour professionals has increased, players on the Challenge Tour are earning less. A player who finished 50th at the end of the 2019 Challenge Tour earned just £29,000 in prize money. Five years earlier, that same golfer would have earned £37,000. Don’t forget that expenses have to be paid from those sums.

One Challenge Tour player said: “I’ve been through financial ruin as a result of my commitment to continuing to play, and how I was, and still am, unwilling to give up my dream. It’s cost me my marriage as well. So that’s the price that I’ve paid to continue playing golf. I wouldn’t change it for anything, I really wouldn’t. It’s upsetting that it led to, in fact drastically led to, the breakdown of my marriage, but, would I do it all again? Yes – I’d always planned to be a golfer or die in the process.”

Another Challenge Tour golfer said: “Unless you’re winning or in the top five or perhaps top 10 every week you’re not really making a huge amount of money. Almost definitely there are some people which it has cost them money. I would say that more than half the players who are playing, it has cost them money.”

Just like every other sport, golf can be a game for the ‘haves’ and the ‘have nots’. When all is going well, and the putts are dropping and the prize money is being banked, there can seem no better way of making a living. But huge sacrifices have to be made. And sometimes they can take their toll.

Series - What Is Stopping You Playing Your Best Golf?

How Golf Can Help Your Mental Wellbeing