With the resumption of golf in England coinciding with a time seen as the start of the UK golf season, Slingsby Gin, sponsor of the BMW PGA Championship, have launched their own Golf Academy and Celebrity Challenge aimed to inspire and encourage more female golfers to take up the sport this year.

Four celebrities who have never hit a golf ball before will be coached throughout the season as they begin their journey in golf with one golfer being offered the opportunity to play in the BMW PGA Championship Pro-Am in September. 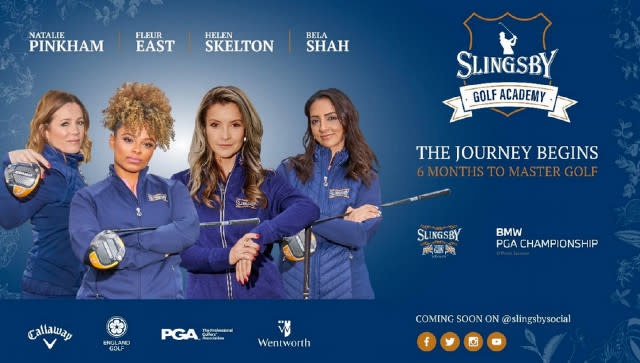 Slingsby hope to drive female participation in the sport through this endeavour and Fleur East, Helen Skelton, Natalie Pinkham and Bela Shah will undergo weekly one-on-one training sessions with their PGA professional partners throughout the 2021 season.

The Golf Academy has received support from Callaway Europe, England Golf and the PGA and after sufficient practice, the four celebrities will face off against each other in a play-off with the victor being awarded the Pro-Am invitation.

Slingsby hope this competition will improve female participation in golf. A report published by England Golf concluded that only 15% of club members were female in 2019 - which is one of the lowest percentages throughout Europe.

The gin company want to demonstrate that golf is a sport to be enjoyed by all and that access to the sport is not as difficult as one might think. The girls' journey will be told through a five-part series – detailing the highs, lows and what they have learned as they prepare for their play-off finale.

The winner, in addition to their invitation to the Pro-Am, will be awarded a £5,000 cheque for a charity of their choice. With support from so many of golf’s powerhouses, the company hope that this will act as a catalyst to provide information, showcase beginner worries and to ultimately inspire more to pick up a golf club.

Marcus Black, co-founder of Slingsby Gin, said: “We’re so pleased to have these four inspirational and influential women as part of our inaugural academy. The enthusiasm and competitiveness Fleur, Helen, Natalia and Bela have shown already, despite the courses being closed, has been incredible.

“With their involvement in this campaign, we can let women know that golf is a sport that can be built into busy life schedules - allowing you to be active and enjoy socialising with friends at the same time."

England Golf CEO, Jeremy Tomlinson said: “England golf is delighted to be supporting Slingsby’s celebrity Golf Academy and I am very much looking forward to seeing the girls take to the course. We at England Golf are committed to supporting and encouraging female participation in golf and sharing this vision.

“Breaking down the boundaries that many women face when wanting to get into golf is no easy task and I believe this documented series will help us on our journey to eliminating misconceptions about the game."

The first episode of the Slingsby Golf Academy is available to watch on Slingsby’s social media channels (@slingsbysocial) and brief clips are scheduled to be broadcasted on Sky Sports throughout their journey.