WINNING on the PGA Tour is no easy matter. Just ask Tony Finau, who shot a final round of 64 in the Genesis Invitational at Riviera Country Club but came up agonisingly short yet again. Finau still has only one title to his name, the 2016 Puerto Rico Open. He is a Ryder Cup player and records top 10 finishes for fun but he had to give second best this time to local man Max Homa.

As a youngster, the sweet-swinging Homa used to dream of winning at Riviera and it came to fruition for him as he beat Finau in a playoff to claim his second Tour win – but not before a twist even the best Hollywood writers might have had trouble scripting.

With Finau scorching the course ahead of him Homa came to the par-five 17th hole needing a birdie to tie for the lead but he lost his approach shot in a bunker on the right, leaving himself short sided. A clutch shot followed by a six-foot putt sent him to the 18th hole knowing he needed a birdie to pip Finau.

He struck a perfect drive and then hit a wedge to three feet and then looked on in horror as the short putt lipped out. “Obviously it wasn't a very good putt,” he said. "It broke a little more than I would have liked it to for a three-footer. I just was a little nervous, honestly. This tournament means a lot to me.” Homa said after that seemingly simple putt lipped out and sent him to extra holes.

Before he went out to face Finau he got a phone call from his wife, Lacey.

“She would give some really dumb advice every day before I play, they were very random. Sometimes they're very wise, but they're just out of left field, whatever she could think of, so it was kind of ironic that that's the one she came up with,” Homa said. “She called me after (the missed putt), told me to remember to forgive quickly and it was kind of perfect because I played a pretty perfect round of golf, very flawless, so what was there to be too mad about? I was about to be in a playoff at the place I first fell in love with golf.”

The playoff began at the par-four 10th and Homa promptly hit his tee shot next to a tree. It appeared that the dream was over. Instead he produced an incredible recovery shot to the green that would ultimately help extend the playoff.

“Sometimes when you get your creative brain working, you see it. I felt pretty good about putting it on the front right of the green. Just sometimes you have to trust your instincts and that's kind of the fun of golf. It's not always fairways and greens, you've got to be an artist at times and fortunately I did it when I needed to.”

During Saturday’s wild winds he hit what his fellow pros were calling one of the greatest shots ever hit on the 10th hole when he was able to stop the ball under the hole, on the green, from the bunker on the front right. He would convert the birdie.

After that escape a par on the second playoff hole was enough to secure the now 30-year-old his dream. He also moved to 10th spot in the FedExCup and secured a berth in the World Golf Championships  at The Concession as well as a three-year exemption on Tour.

“I don't know if I could ever do anything cooler in golf than this,” Homa beamed. “Just for me, for my caddie Joe, we were raised 25 miles north of here. [Tournament host] Tiger Woods is handing us a trophy, that's a pretty crazy thought. We grew up idolising him, idolising Riviera Country Club, idolising the golf tournament. To get it done, it's almost shocking, but it feels like it just can't be topped.”

Spare a thought for 54-hole leader Sam Burns. Last month he went into the final round of the Farmers Insurance Open with a great chance of winning for the first time but closed with a round of 75.As he reached the turn, Burns appeared to have the Genesis in his pocket but it all unravelled for him with dropped shots at the 12th, 14th and 15th and he finished the week on 11 under par, one shot behind Homa and Finau.

Woods says he's doesn't know when he will return from a fifth back surgery, and he could not give a definitive answer when asked if he would be at The Masters.

“God, I hope so,” Woods said at The Genesis Invitational.

Woods, at Riviera to hand out the trophy as the tournament host, had a microdiscectomy on December 23. It was the fifth surgery on his back, and the first since a procedure to fuse his lower spine in April 2017.

“I'm feeling fine,” Woods said. “I'm a little bit stiff. I have one more MRI scheduled so that we'll see if the annulus (fibrosus) is scarred over finally and see if I can start doing more activities. But still in the gym, still doing the mundane stuff that you have to do for rehab, the little things before I can start gravitating towards something a little more."

Woods has not played since he joined 11-year-old Charlie at the PNC Challenge a few days before his surgery.

“I don't know what the plan is,” he said when asked if he would try to play before The Masters. 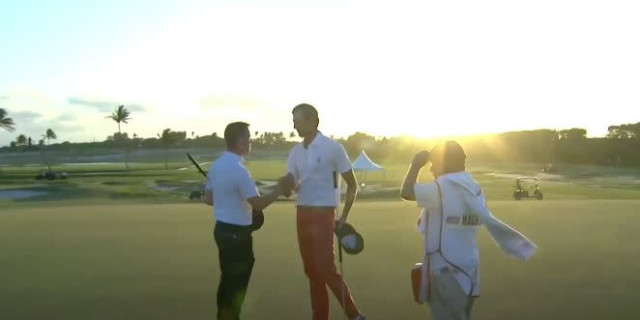