THEY say that there is no rest for the wicked and it certainly seems like the elite of the PGA Tour have hardly had time to draw breath before they return to action at the Tournament of Champions, an event exclusively for men who won in 2018. It is held at the magnificent Plantation Course at Kapalua on the paradise island of Hawaii, so let’s not be feeling too sorry for these guys. What? Oh, you don’t feel sorry for them. And quite right too.

Dustin Johnson will return to defend the title he won 12 months ago. It was won in 2011 by Jonathan Byrd, in 2012 by Steve Stricker, in 2013 by Johnson, in 2014 by Zach Johnson, in 2015 by Patrick Reed, in 2016 by Jordan Spieth and in 2017 by Justin Thomas - that is a pretty impressive list by anybody’s standards, and it is safe to assume that the 2019 champion will be another household name, with Johnson surely starting as favourite to win yet again. 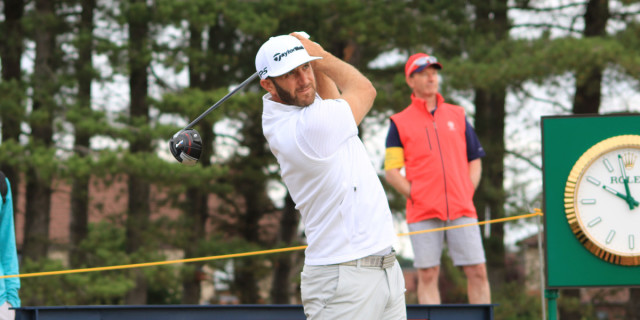 Kapalua is a bomber’s paradise and it is made for Johnson. There are those who believe that the Dustinator had a poor season in 2018 and while it is true that he once again made some headlines for all the wrong reasons, the big fella did win three times on the PGA Tour.  He brought the course to its knees 12 months ago, recording a 72-hole total of 24 under par as he finished a remarkable eight shots ahead of Spain’s Jon Rahm. So how do you follow that? In Johnson’s case, probably with more of the same. He can reach every par five comfortably in two shots, which, of course, gives him a huge advantage.

But there is now far more to his game than 310-yard drives. Johnson has always known that he can overpower golf course but where he has improved hugely has been with short irons in his hand. He has done a great deal of work with his coach, Butch Harman, and you don’t win the number of tournaments he does without being able to pull out a wedge and consistently knock the ball close. And he can putt.  So who is most likely to challenge him?


Rory McIlroy, who won the Arnold Palmer Invitational in a year that was otherwise another disappointment, is throwing down the gauntlet early. This is an event he has often chosen to miss in the past but while he continues to mull over whether or not to renew his membership of the European Tour, the Northern Irishman has decided to kick off his year in Hawaii. He hasn’t been seen in anger since helping Europe to win the Ryder Cup and will know that there will be many eyes upon him in 2019. It seems scarcely believable that he really plans to play all of his golf in the United States. McIlroy continues to be a huge draw wherever he plays, but he needs the European Tour as much as it needs him - and it definitely needs him.

Players such as Tommy Fleetwood, Tyrrell Hatton and Francesco Molinari will continue with the balancing act that will see them split their time between both tours. Americans Patrick Reed and Xander Schauffele will  flbe doing the same. Reed has always said that he feels he can only continue to improve as a golfer by testing himself in different conditions.
McIlroy has said that he loves the test that the PGA Tour provides, namely glorious weather, little or no rough and what amounts to target golf. But he is a former Open champion, he was brought up playing in testing conditions and he knows that he can win on links courses.

There is little doubt that Fleetwood would be a sensation if he ever decided to focus purely on the PGA Tour but he believes that he will continue to develop as a player by plying his trade mainly in Europe. And he is surely correct. Paul Casey, Ian Poulter and Justin Rose are all full members of the PGA Tour and are all coming off brilliant years that saw them winning on American soil. But do you believe that any of them would consider abandoning Europe? Casey did so for a while but it was only because his game had deserted him and he decided that the way to get his confidence back on track was to stick with the PGA Tour. When he began to contend again and it became obvious that his game was going in the right direction, he rejoined the European Tour. Poulter loves coming home. So does Rose.

So what of McIlroy? Like Johnson, this course should suit him. We will see him reaching par fives with a driver and a flick of the wrists with a short iron, but has he spent the past couple of months finding a putting stroke that will work? No player in the world’s top 10 misses more putts from less than six feet than McIlroy - if you doubt it, check out the myriad statistics provided by the PGA Tour. More worrying for his fans, he also started missing fairways with the big stick in his hands.

There is little doubt that McIlroy’s issues with the putter are firmly between his ears. If he holes a couple of six-footers early in his round, the chances are that he will then go on and hole everything he looks at. He has worked with Brad Faxon and sought advice from other quarters too, and perhaps there is now too much information floating around in his head. His early-season form will tell us much about what we can expect to see as the year unfolds. There is a party feel to the Tournament of Champions but you can expect to see a fully-focused McIlroy at Kapalua.

Keegan Bradley and Brandt Snedeker return for the first time in a while after returning to the winners’ circle in 2018, while Aaron Wise will experience it for the first time. Poulter and Casey will be there too.

And, of course, the inimitable Bryson DeChambeau, who just can’t seem to stop winning. There were three victories last season and he has already added another in the new wraparound 2018-19 season. You can say what you like about DeChambeau, his attitude and his swing but it is impossible to ignore him. When he turned professional, did anybody ever believe that he would become a serial winner? Erm, yes - Bryson DeChambeau did, and he was prepared to tell anybody who was prepared to listen.

The only players to qualify who have chosen not to play are Justin Rose, Phil Mickelson and, unsurprisingly, Tiger Woods. That leaves a field of 34 winners, including Cameron Champ. And the young man will simply love this course. It is a bomber’s paradise and he is a bomber of the first order.

Rory McIlroy. Should adore this place

Cameron Champ. Will adore this place

Dustin Johnson. Kapalua is made for his game

Rory McIlroy. Looking for a fast start to the new year

Cameron Champ. The next superstar

Charles Howell III. First time he has been here for an awful long time

Francesco Molinari. This is a big year for the Italian