Fathers and Children Explain How Golf Brings Families Together

Father's Day is a special occasion for many families, and golf has a unique way of bringing them closer together. American Golf has explored this subject by sharing the story of three sets of fathers and their children, looking at the role that the game has played in their relationships.

Over recent years American Golf has helped many families spend more time together, on and off the course, through events such as the American Golf Junior Championship, Family Championship and Long Drive Championship. The brand has met some incredible families who have stood out both for their ability and the strength of their bond.

To celebrate Father’s Day, American Golf asked some of the Fathers’ and their children to talk a little about the experience of being a team, playing together and what the game of golf means to them. Take a look at the highlights and I’m sure you’ll agree that the game of golf has given something to their relationships that is hard to define, but it definitely looks like they have a lot of fun! 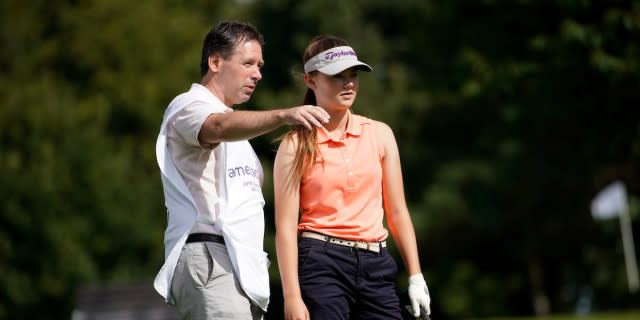 Elle and Dean first met the team at American Golf when Elle took part in the 2016 American Golf Junior Championship. At just 13 years old and playing off 16 Elle plotted her way round the final, with the help of dad Dean caddying, to record an incredible net 63 and take the girls title. On winning the event Elle commented, "I really enjoyed the day, everyone was really friendly which helped to calm my nerves! It was great having my Dad caddy so he could share the experience too.” Elle has since gone on to finish second by just one yard in the 2017 American Golf Long Drive Championship, during which Dean showed far more nerves than his daughter!

Dean credits golf for the strength of his relationship with Elle and treasures the times that it’s just him, Elle and their clubs, “As Elle has got better at golf I’ve spent as much time supporting her as I did playing but that is just as special as being on the course. That said, one of my favourite things is just grabbing a few clubs and heading down to Topgolf for a couple of hours with her. We’re guaranteed to have a laugh and enjoy the competition. Golf gives me time with Elle that is so unusual for a dad and a teenage daughter and I think it’s played a huge part in us getting on so well.”

Aaron and Vic have been part of the American Golf family since 2015 when Aaron took part in the Junior Championship Future Stars category at the age of 8. 2 years later and Aaron was lifting the overall Junior Championship title with Dad Vic caddying throughout the winning round. Aaron and Vic then teamed up later in the season to take on the American Golf Family Championship. Their consistent teamwork took them through the qualifying rounds to secure a place in the final at Ryder Cup venue the Belfry where they enjoyed two days of each other’s company on the iconic course.

After spending an incredible year by Aaron’s side Vic reflected on the impact that golf has had, “I’ve been playing golf with Aaron for most of his life and I can’t say how much fun it’s been. To get to spend time with him away from school, work and life’s pressures at some fantastic golf venues is so special. I can’t think of another activity we could do that would give us the same chance to get to know each other and enjoy each other’s company so much.”

The Malkins Bank qualifier of the American Golf Family Championship in 2017 was the first time Ian & James had played competitive golf together. They secured victory and a place in the final at the Belfry, all the time keeping broad smiles on their faces and enjoying the camaraderie. Those smiles only got bigger as finals weekend progressed with them ultimately taking the matchplay final 3 & 2. That win secured them a spot in the American Golf Tournament of Champions in Mauritius in which, after sunning themselves for a few days along with mum Ruth, they took the overall title of Champions of Champions. After the end of their journey from Mauritius Ian commented, “When your kids become teenagers you expect them to go their own way and start making their own lives. James has done that like any normal lad but we still have our time on the course. Golf gives us a connection and common ground but most importantly it gives us time to get on and enjoy each other’s company. To be so successful with the American Golf tournaments was the cherry on top but golf is what has given so much to our relationship.”

If you’re inspired to get involved, visit www.americangolf.co.uk/golf-with-dad/golf-with-dad.html to see how you can win an early Father’s day present that Dads and their kids can enjoy together.