DUSTIN JOHNSON produced the shot of the year at the first playoff hole to defeat Jordan Spieth, win the Northern Trust and claim pole position in the FedEx Cup Playoffs.

The two men, each seeking their fourth victory of the season, finished tied after 72 holes. Back they went to the 18th tee. Spieth found the middle of the fairway, 172 yards from the green. Johnson took dead aim over the massive lake that dominates the hole and smashed his drive 342 yards. He was just 89 yards from the green and hit the ball four feet from the hole before rolling in the putt for a winning birdie.

In a battle for the ages, Spieth and Johnson produced some sensational golf. After two early birdies, Spieth found himself five shots ahead on the front nine. But the Dustinator refused to give in and holed a dramatic curling putt on the 18th for a round of 66 to force the playoff.

It is the first time in his career that Spieth has failed to hold on to a 54-hole lead, and he was left to rue a double-bogey at the sixth, where he put his tee shot into the water, opening the door for Johnson. As usual, Spieth holed more than his share of putts in his final round of 69 and was in sanguine mood at the end of the day. “I didn't lose the tournament," Spieth said. "He won it. I thought that was a fun show," Spieth said. "I was hoping it wasn't going to be that much fun.”

Johnson wiped out the five-shot deficit in five holes. They were tied on the par-three 17th when both found a bunker, and Johnson blasted out to four feet. Spieth had 18 feet for par and knocked it in, as he always seems to do when it really matters.

On the closing hole, Johnson carved his drive way right into a dreadful lie. He had little option but to lay up, but still escaped with the par that took the tournament into extra holes. Both men finished at 13-under 267.

It was Johnson's first win since injuring his back during the build-up to The Masters. "I feel like the game is finally back in form like it was before the Masters," Johnson said. This was his 16th victory, his fourth of the season and it reinforces his position at the top of the world rankings.

It had all looked like it was going to be a stroll in the park for Spieth when he birdied the third and fifth holes to move five ahead. But at the par-three sixth his tee shot hit a rock and bounced into the water. It cost him a five. There was another two-shot swing at the ninth, where Johnson made a birdie while Spieth three-putted. And when Johnson also birdied the 10th hole, they were level and it was game on.

Bubba Watson, David Lingmerth and Harold Varner III all moved into the top 100 in the FedEx standings and clinched their places in the field for TPC Boston next week.

JULIAN SURI produced a sensational final round of 64 to claim his maiden European Tour victory at the Made In Denmark. The American, who has been playing on the Challenge Tour this season, earns automatic promotion after finishing on 19 under par to secure his first victory in just his seventh European Tour event.

For 17 holes, it had been a thrilling battle between Suri and England's David Horsey, a former winner of this event. Horsey was one adrift standing on the 18th tee but a triple-bogey seven handed the title to the American. It was a bitterly disappointing end to the week for Horsey, who had fought back brilliantly after a poor start to his round.

Suri began the day two shots behind Horsey, but the Englishman dropped a shot at the first, while Suri birdied the second, third and fourth to take control. And there was more to come. He moved to 17 under when he hit a glorious approach to the seventh.

It seemed that Horsey's challenge was over, but back-to-back birdies at the 11th and 12th saw him catch Suri on 17 under. Both men then holed 12-feet birdie putts at the 14th. Suri got his nose in front again with a 15-foot birdie putt at the 15th.

Horsey hit a wild tee shot at the last and lost his ball. And that was that.

The Made In Denmark is a special golf tournament, the nearest thing the European Tour has to the PGA Tour's Waste Management Open in Phoenix. Huge numbers of spectators turn up to watch and, bizarrely, many of them come armed with plastic squeaky ducks which they squeeze whenever a birdie putt is holed. The ducks are sold to raise money for a children's charity.

And thousands upon thousands of spectators surround the tiny 16th hole in the hope of seeing a hole in one. When the flag is located at the front of the two-tier green it is one of the easiest holes on Tour and produces birdies for fun. But don't end up on the wrong level. The atmosphere is astonishing, and the players love it. 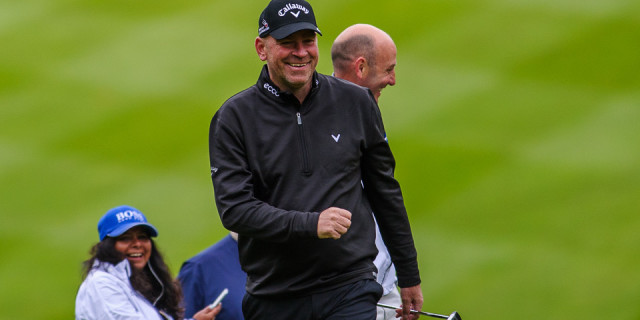 It was an emotional week for Thomas Bjorn, the Dane playing in his 500th European Tour event in front of his home fans. The Ryder Cup captain finished on four under and afterwards he said: "This has been a big, big week for me, and I have loved it, even though my golf wasn't up to much. Denmark is a small country but we are proud people. I have been moved by the sheer numbers who have followed my career around the world and have supported me throughout, and they have been out in force this week. I want to thank each and every one of them."

Suri was thrilled with his victory. "This is the reason why you get up early every morning to practice, go to the gym and get prepared to succeed. This is a great feeling for sure," he said.

“To have seven birdies and be bogey-free in the final round was really solid. I'm pretty proud of that. I just went out there today and tried to keep doing what I had been doing all week. I was hitting so good so I knew I could win if I kept doing that and thankfully it worked out.

"It was a blast out there. Especially in that atmosphere with the fans. It was really cool. Everybody is so enthusiastic out there, with such genuine appreciation for the game and spectacle. I just wanted to soak it up as much as I could.

“I love it when it comes down to two guys. I think it’s the epitome of our game and really the epitome of all sports. I feel like my game belongs at the top of the game. This is definitely something I've worked for and kind of expected for a long time. But to finally come out and do it, especially after the string of good finishes this summer, is really special.”

Horsey tried to find some positives. "I had a clumsy start and didn’t really hit it close enough and wasn’t quite firing in the first seven holes. But I managed to make a few birdies around the turn and it turned into a great battle to be honest. He played very well and thoroughly deserved his victory," he said.

“When someone is playing as well as Julian was, you know that you are going to have make birdies and it really focuses you on what you have to do. It was a great battle – it’s just a shame I couldn’t put more pressure on him coming down the 18th.

“My game is coming on and the changes I am trying to make are starting to take effect. It’s still not quite where I want it but we are getting there and there are a lot of positives to take from this for the rest of the year – hopefully I can finish the season strongly.”