ANTHONY WALL travels to Germany to defend the Paul Lawrie Matchplay and will fancy his chances after finishing fourth at the Scottish Open and 20th at the Irish Open. It was an amotional victory for the 42-year-old Englishman, whose only previous success came at the Alfred Dunhill Championship was back in 2000.

He is one of golf's good guys, a man who reels out top 20 finishes for fun. And he is a hugely underrated golfer - proof of the pudding came with the fact that he defeated Alex Noren in the final last year.

Lawrie will be delighted that his tournament has captured the imagination of his fellow professionals and the public alike, and will be trilled that he has managed to attract an excellent field as the tournament moves to a new venue, Golf Resort Bad Griesbach.

Matthew Southgate would be a popular winner. He started played when he was just two years old, encouraged by a combination of his father and watching videos of Seve Ballesteros winning The Open at St Andrews in 1984. He briefly attended college in Illinois but became homesick and returned home. He turned professional in 2010 and has twice lost his card, in 2012 and again in 2013. 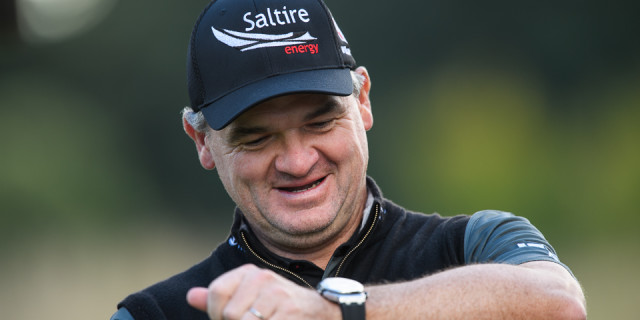 Life has not been easy for the 28-year-old Englishman. He was diagnosed with testicular cancer in 2015, at a time when he was struggling with his game, but later that year he ground  his way through the European Tour's qualifying school to earn his card for 2016. The early signs were anything but encouraging, but then he came from nowhere at the Irish Open, where he finished fourth behind Rory McIlroy. He then qualified for The Open and secured his playing rights for 2017 with another good finish, this time at the French Open.

There is obviously something in the Irish air that suits Southgate as he played brilliantly at Portstewart in July and finished second to once again secure his rights for next season. He then headed off to Birkdale to take part in The Open and after narrowly making the cut he finished with rounds of 67 and 65 and found himself in a tie for sixth place. Southgate has captured the hearts of golf fans all over the globe - he plays golf with a smile on his face and a maiden win surely cannot be too far away.

At the moment, one could never accuse Victor Dubuisson of playing with a smile on his face. There are times when the Frenchman gives the impression that he would rather be anywhere than on a golf course. He is an amazing talent, with a short game on a par with Ballesteros, but he appears to lose interest and can get down on himself and everybody around him. When he first made his breakthrough, many knowing sages tipped him as a potential major winner. It is difficult to put your finger on precisely what has stopped him in his tracks but it is clear that he needs to get his act sorted out soon.

He has twice won the Turkish Airlines Open and reached the final of the World Matchplay, losing out to Jason Day in a thriller. Dubuisson made his Ryder Cup debut at Gleneagles and seemed to have the world at his feet but this year he has missed six cuts, has not played an awful lot of golf and needs a big week.

Lawrie will be especially pleased to see Matthew Fitzpatrick in the field. The young Englishman can win anywhere in any conditions. He does not drive the ball terribly far but has no other weaknesses. He has few peers with a mid-iron in his hands, but what really separates him from so many of his rivals is his astonishing short game. Whether it be a full wedge, a greenside bunker or a stubby lie next to the putting surface, Fitzpatrick has an unerring ability to get the ball up and down. And his putting is in a class of his own.

He has already contended at The Masters, has played for Europe in the Ryder Cup and continues to go from strength to strength. Fitzpatrick is the real deal and will surely fancy his chances of adding another title in Germany.

Look out, too, for Paul Dunne. The Irishman first came to the fore at The Open at St Andrews in 2015 when he stepped onto the first tee on the final day leading the tournament as an amateur. Unsurprisingly, he faded in the last round but it was an experience that he will never forget. He turned professional soon afterwards and it is fair to say that the transition hasn't been as smooth as he would have hoped.

However, there have been plenty of encouraging signs this season. He finished tied sixth at the Tshwane Open and secured his card with a runners-up finish at the Trophee Hassan, where he lost in a playoff to Edoardo Molinari. Dunne is a small man but he hits the ball out of sight. His confidence is growing all the time and many believe that a maiden win could open the floodgates.

Matthew Southgate. Victory is all that is missing from his CV

Paul Dunne. Ready to take the next step

Matthew Southgate. Would bring the house down if he wins

Victor Dubuisson. It only takes one week Victor

Richard Bland. Playing some of the best golf of his life

Nicolas Colsaerts. Unbeatable on his day