Getting into golf: Lesson 4 focus on the short game

In the sixth feature of this series of getting into golf articles written by Kim Dowsing, partner of regular Golfshake contributor Derek Clements, Kim completes her 4th lesson.

I turned up for my fourth golf lesson with Caroline Grady at Bawburgh Family Golf Centre suffering pain in my chest after a minor fall, and I knew that making a full swing was going to be well-nigh impossible.

"No problem Kim, we will focus instead on the short game today, looking at pitching and chipping," Caroline said. "The short game is the most important part of golf but it is the thing that most people fail to focus on. You see lots of people who have a handicap of, say, 15 and above who can hit the ball pretty well but when they get within 50 yards of the green they simply don't have a clue. I don't want that to happen to you. 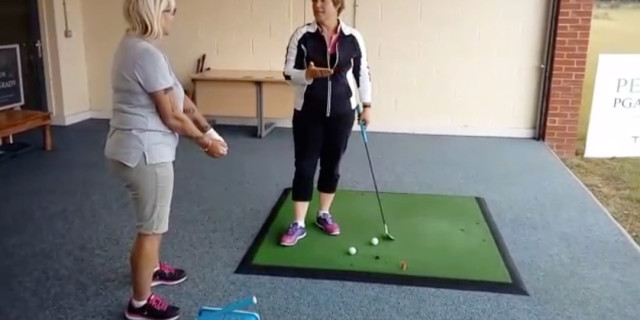 Caroline went on to explain to me that a chipping stroke should be very like the one that we use for putting. And the letter Y? That is what should be formed between your arms and the club. "Chipping is a shorter shot similar to a putt and is generally played close to the green from about 40 yards and in. It is a lower running shot played with a 7 or 9 iron. Top spin is applied to the ball to allow for the correct run-out distance. if you have an obstacle such as a bunker to chip over then use a sand iron to create the necessary loft. For 40 to 100 yards we come into the pitching zone and a different technique applies.

"When you chip the ball properly, most of the ball's travel will be along the ground," said Caroline. "So I want you to address the ball with it slightly back in your stance, using a seven iron or maybe a nine iron, and you should grip down the club. Most of your weight should be on your left side, to a ratio of about 60-40.

"I was given a useful tip many years ago which helped me with my chipping - think about stroking a cat when you play these shots. It is a gentle motion. And you need to focus on keeping the speed constant - don't slow down through the ball and don't accelerate either. On top of that, try to keep the backswing and followthrough the same length."

It all made perfect sense and soon I was hitting chips of different lengths and watching the ball roll out. Obviously, this is all about practice, to help me get the feel and to see how how hard I needed to swing to get the desired distance. When chipping with a nine iron it is a 50-50 split - 50% flight and 50% ball roll. With a seven iron it is one-third carry and two-thirds ball roll.

"Pitching is a different shot, played with different clubs. Essentially, you pitch the ball to clear hazards such as bunkers or mounds and the ball spends more time in the air and when it lands on the green it will not roll as far. So that is where the letter L comes in. How? You hinge your wrists so that when you reach the top of your backswing, which should be at about hip height, the shaft of the club points towards the ground and forms an L with your arms. For these shots you will use a far more lofted club, such as your sand wedge or your lob wedge. You may even want to put a 60-degree wedge in your bag. And the key to playing this shot well is to keep everything smooth - many players have a tendency to try to help scoop the ball into the air. There is no need to do that - remember that the loft of the club is designed to throw the ball into the air. If you try to help it the chances are that you will catch the ball with the sole of the club and thin your shot into the very hazard that you are trying to avoid."

Pitch shots are played with the ball more in the middle of the stance, with the arms and body turning back and through together. As with the chip, you should grip down the club. Two-thirds of the shot is ball flight, one third is roll. Mastering this wasn't as straightforward as Caroline made it look. She stressed the importance of getting through the ball and turning my hips and chest towards the target. Initially, the results were not pretty but later that day I went to the practice ground, dropped six golf balls in front of a bunker and, lo and behold, all six of them popped up in the air, cleared the bunker and landed on the green.

I now realise that if I am going to learn how to score then I need to work hard on this part of the game. Hitting a full shot properly feels great, but I got a real sense of satisfaction and achievement from playing pitch and chip shots properly.