Celtic Manor The Resort that has it all

THERE is far more to Celtic Manor Resort than just the Twenty Ten course that was the venue for the Ryder Cup, won by Colin Montgomerie's European team.

The five-star resort, which hosted a Nato conference in 2014,  is set in more than 2,000 acres of parkland at the gateway to Wales.

It boasts two fine hotels – the 330-room luxury Resort Hotel and an historic 19th-century Manor House with 70 rooms – two spas, two state-of-the-art health clubs, a shooting school, fishing, treetop high ropes course, tennis courts, mountain biking and walking trails. Celtic Manor offers a great experience whether you are staying for business, pleasure, leisure or golf. There is a choice of six restaurants, including the Terry M and the Newbridge on Usk, a separate country inn with six bedrooms.

Read our overview of Celtic Manor's Ryder Cup Course - The 2010

Celtic Manor is much decorated. In 2005 and for five years running from 2007 to 2011, it was voted the Number One Conference Hotel by readers of Conference and Incentive Travel Magazine and was named UK Sport Venue of the Year and Europe’s Golf Resort of the Year for 2011. It offers the challenge of three 18-hole championship golf courses, including the Twenty Ten course, the first course in history to be designed and built specifically to host The Ryder Cup.

But we are focusing here on the Roman Road and the Montgomerie courses, which are both very special in their own right.

The  first of the resort’s courses, Roman Road opened in 1995 and was immediately ranked the top inland course in Wales by Golf Monthly magazine. 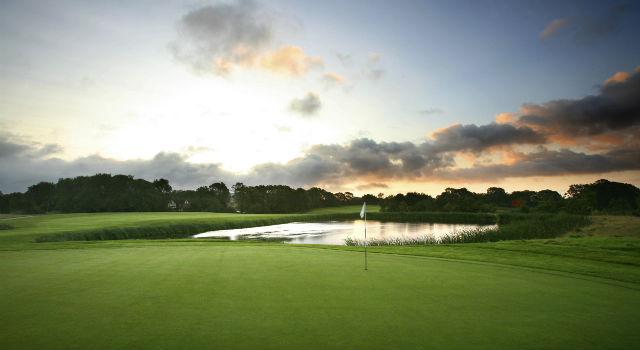 This par-70 course overlooks the Severn Estuary with views across to Somerset and Devon. Designed by Robert Trent Jones Senior, it is named after the many Roman roads that criss-cross it and was shaped to avoid disrupting any remains.

It was the host venue for the Wales Open from 2005 to 2007 and is bordered by woodland. A challenging golf course, it features some long open fairways and also a number of twists and turns through trees and across lakes and streams.

The Roman Road is well bunkered and features many large, well contoured greens and great poutting surfaces. The course has some tight, tree-lined fairways but on several holes you can open your shoulders and know that you will find nothing worse than the semi-rough if you are wayward. Many holes require a strategic approach, with bunkers forcing you to place your drive. You also can't help but notice that the ball sits up invitingly on beautiful, well-manicured fairways.

At just under 6,500 yards it isn't a monster by any means but it plays longer than it measures. With two par fives, a couple of long par fours and a 200-plus yard par three in the first five holes, you don't get a chance to relax until the sixth hole, and the front nine closes with two more long holes.

The inward nine is shorter but more undulating. The par-three 11th is played through an avenue of trees, while the par-four 13th requires a carry over a ravine.  The 16th is probably the prettiest hole, wending its way around a lake. The 17th measures just 142 yards but is still a testing par three. And you finish your round shortest at just 142 yards whilst the final hole played to a green in front of the clubhouse is a good test

The Montgomerie course was designed by Scottish golfer Colin Montgomerie and although it may only be a par 69 it was regarded as challenging enough to host the Wales Open. Anybody who knows how Monty played the game when at his peak will not be surprised to learn that the course is all about strategy. You have to plot your way round to shoot the best score. It also features several pot bunkers that can destroy a good scorecard. 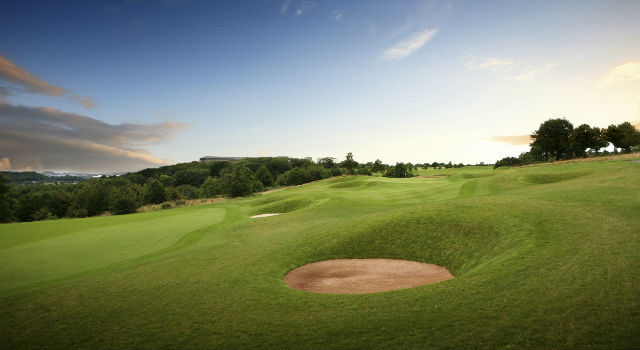 Like the other courses at Celtic Manor, the Montgomerie provides spectacular views  from the tees and some breathtaking downhill approach shots.  It is an undulating course and you might find that the best way of negiating it is on a buggy/

The best holes are the downhill par five third, which can be reached in two shots and has the added bonus of offering great views from the top of the fairway, and is followed by a terrific par three measung 181 yards from the back tee.

The 10th is a corker. It is a downhill dogleg par four where you have to make the choice about how much you want to cut off before hitting your approach to a green guarded by water.

The par three 15th is played to a green cut into the hillside with a sharp drop to the left. The 16th is another hole that features an elevated tee and the 17th is a reachable par four that can destroy a good score if you try to bite off too much.

There are luxury locker rooms with marble showers and a dedicated golf reception, with a golf services team to help with equipment and buggies.

Celtic Manor also has one of the best golf academies in Europe!

A visit is a must for beginners and experienced players alike. On -site PGA professionals will provide help and guidance to improve your game, whether that be showing you how to pick up a club for the first time, full analysis of your swing using the latest digital technology, or helpful tips to solve a problem.

Golfers of all standards can brush up their skills on a 28-bay two-tier driving range or take a lesson in one of the state-of-the-art swing studios. There is also a wide choice of tuition packages to choose from, for groups of friends, individual players and specially tailored options for juniors.

There are some fantastic offers available from Golfbreaks.com -  offers start from £69 for one night Bed & Breakfast and two rounds of golf (Roman Road & Montgomerie courses) staying in the Manor House. The latest addition to Celtic Manor is the Hunter Lodges which are adjacent to the Twenty Ten course. In all, there are eight lodges, and all offer complimentary use of the resort's health & fitness clubs, free wi-fi, access to walking trails and cycle routes.  Each lodge has a barbecue and a jacuzzi. Prices start from £201pp for 2 nights & 3 rounds of golf - based on playing the Roman Road and Montgomerie courses.

This fantastic facility features three pitching greens and three tees made from Huxley artificial turf, all with grass and artificial turf options meaning that the facility can be used for practice and tuition in any weather throughout the year

The Indoor Putting Studio gives golfers the opportunity to have their most used club custom fitted to their own specification.  Cutting-edge technology designed by Science and Motion Sports will analyse your putting stroke, custom fit the correct putter for your game and help you to hole more putts.

Golfzon is an advanced 3D golf simulator that lets you play some of the most famous golf courses in the world, including St Andrews, Pebble Beach, Bay Hill, The PGA National Resort, Turtle Bay and dozens more.