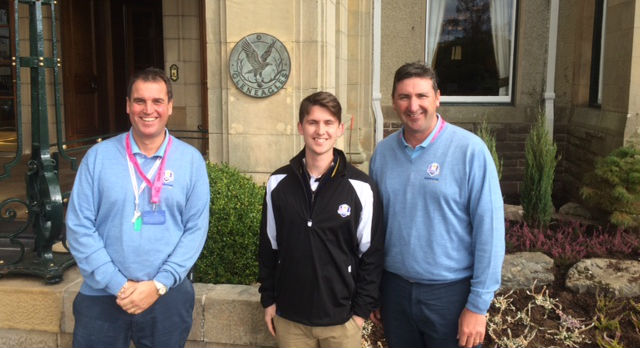 Kedleston Park, Derbyshire’s premier golf club, is delighted to announce that General Manager Robert Simpson and Member Kevin Feeney, have been selected as officials for the 2014 Ryder Cup at Gleneagles, Perthshire.

The Kedleston Park pair will both be involved on all three days of the world’s third largest sporting event, played on the PGA Centenary Course at Gleneagles from 26-28 September 2014. Watched on TV by millions across the globe, Robert will be refereeing the first match of the competition on Friday morning, as well as the second match on Saturday afternoon and will be an observer in the last singles match on Sunday. Kevin will be refereeing the second match on Friday afternoon, the last match on Saturday morning and will be an observer in match eight on Sunday.

Ian Neal, Chairman of Kedleston Park Golf Club, commented: “ What a fantastic honour for both Kevin and Robert and also for Kedleston Park. We’ll be sending them both good luck and best wishes for what is sure to be a fantastic experience.”

Finally, Kedleston Park member, Luke Whitehouse, pictured with Robert and Kevin at Gleneagles, has also been at Gleneagles for the Ryder Cup, working with The European Tour on staging the event for the eight weeks.

Set in the grounds of Kedleston Hall, Kedleston Park Golf Club is a mature parkland championship golf course in Derbyshire that offers a competitive, but friendly and welcoming, environment for golfers of all levels.