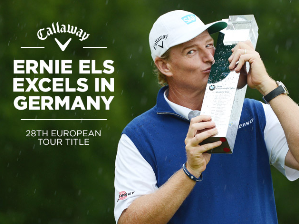 Els opened up with a scintillating nine-under-par 63 to lead a four-strong group by one shot after a low day of scoring in Germany.

He posted a three under 69 in round two to lead little-known duo of Matthew Baldwin and Alexander Levy with two rounds remaining.

The Big Easy shot a second-consecutive 69 on Saturday to stay atop the leaderboard but had Levy and Sweden’s Alex Noren for company on 15-under-par heading into Sunday. The tournament was finely poised after 54 holes, with 11 players within three shots of the lead.

Both Levy and Els reached 18-under-par on the front nine, but both dropped shots on the back side to let a whole raft of players back into the tournament.

Standing on the 18th tee, though, Els held a slim one-shot advantage over Bjorn, who made a costly double-bogey on the 14th hole while he was tied for the lead.

The Dane made birdie, but Els matched his four to win his 68th professional title and become the oldest ever winner of the BMW International Open.

Els has been one of the most prolific golfers of the modern generation and his European Tour successes have been unparalleled. He’s now won 28 European Tour events (seven of them wire-to-wire) in an incredible 282 starts and earned more than 29 million Euros in the process. He’s also now won four European Tour events since turning 40 and moved back inside the top 15 of the Official World Golf Ranking.

It was great to see American Dustin Johnson in the field this week. Sadly, most Americans simply don’t make the effort to play any non-major events on the European Tour. Granted, Johnson’s participation was probably driven by sponsors, but it was great to see his name on that leaderboard. Nowadays, a huge number of Europeans play in America week in, week out, and it’s nice to see the reverse happening every once in a while. Hopefully, Johnson will now be tempted back to play some more events this side of the Atlantic. Johnson played in Germany, Peter Uihlein plays full-time and Jason Dufner takes part in the start-of-season desert swing. Let’s hope more Americans start following in their footsteps to help raise the profile of the European Tour.

Bryson is Long, But Distance Has Always Been Key to Success

A Round With A Golf Ball That Only Flies Straight