It was Jason's Day at Bay Hill, while SSP Chawrasia finally won his home Open

JASON DAY silenced the doubters with a dramatic victory in the Arnold Palmer Invitational, doing so in a style that would have delighted the tournament host. The Australian, who won the PGA Championship last year, began the day with a two-shot lead and walked off the second green three ahead after holing an improbable chip for a birdie two.

Day has established a close friendship with Tiger Woods, probably the best front runner golf has known, and Woods told him that the key to finishing off tournaments was to remain aggressive for all 72 holes. It is advice Day has taken to heart. 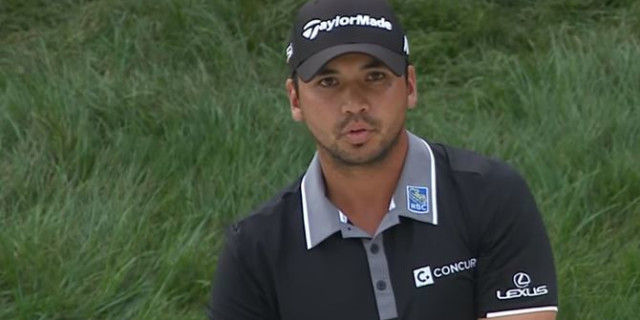 He struggled in the early weeks and months of the 2016 season and there were those who began to question he had lost the spark that saw him dominate the game in the late summer of last year. He always insisted that he wasn't far away from his best form and he proved at Bay Hill that he knew what he was talking about. He played beautifully on days one and two, held on in difficult conditions in the third round and came out firing on all cylinders in the final round, when the pressure was really on.

Among the chasers were Justin Rose, Paul Casey and Henrik Stenson, but Rose fell back after dropping a stroke early on. Day's nearest challengers were Kevin Chappell and Troy Merritt, but Merritt gave himself a mountain to climb when he put his approach in the water at the third, which Chappell had birdied moments earlier to reduce his deficit to two.

But it always looked like it was Day's event to lose, and he duly wobbled with a dropped shot at the third to allow Chappell to move within a shot of his lead. How would the Australian react? By dropping another shot at the next and falling into a tie with Chappell on 14 under. 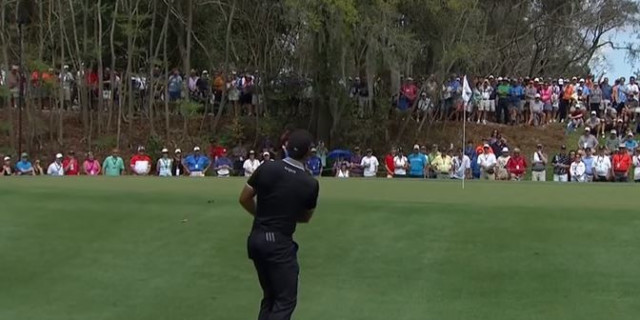 He reasserted himself with a birdie at the next, and so began a ding-dong battle between Day, Chappell and Merritt, with the three men swapping birdies, pars and bogeys. Merritt birdied five holes on the back nine and Day hit a stunning iron at the ninth and then steadied the ship on the back nine.

As they came towards the climax, Chappell moved to 17 under, leading his rivals by a shot. But he hit his drive at the 72nd to the right and dropped a shot, just as Day was holing a birdie putt on the 17th. Chappell's 69 saw him finish on 16 under. Merritt, also on 16 under, split the final fairway, while Day, a shot ahead, went way right but found a decent lie. The problem is that he had to clear the lake protecting the final green. He knew he couldn't stop the ball on the green so deliberately hit his second into a back bunker. 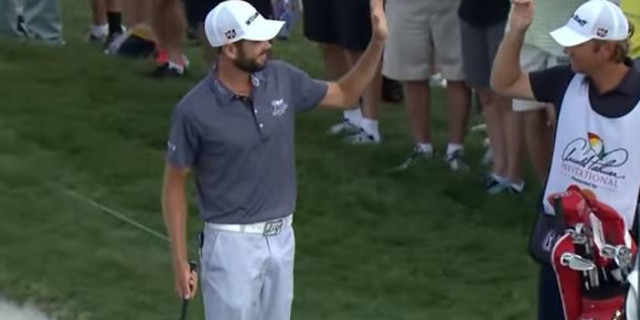 Merritt decided to take on the hole on, but his shot, agonisingly, came up short and landed in the water. His chance was gone, a double-bogey taking him back to 14 under par and a tie for third with Stenson.

So it came down to this - if Day could get up and down from the bunker in two shots, he would be the champion, if he failed to do so he would be heading into a playoff with Chappell, watching events on TV.

It wasn't a straightforward bunker shot. He had fully 35 yards to the flag, downhill, left to right, with the water lying in wait. He played it brilliantly, flying it almost the entire way to leave himself a downhill left to right four-foot putt for a famous victory. The ball never touched the sides. Job done in spectacular fashion. And it was a win that took him past Rory McIlroy and move to second in the world rankings. 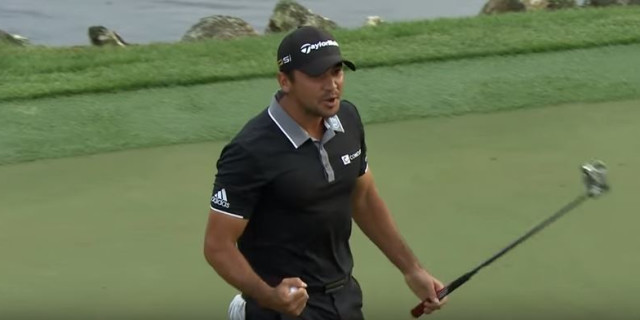 "Winning wire to wire wasn't easy," said Day. "I wasn't comfortable on the golf course today, as three dropped shots on the front nine testified. But I hit a great shot at the par-three 17th. I was thrilled with the bunker shot on the 18th but really nervous over that final putt, especially as I really haven't been in contention this year. I kept telling myself that if the chance came again I would be able to take it.

"It was great to be back in contention again and being able to shake Arnold Palmer's hand at the end after winning his tournament was extra special for me."

Kiradech Aphibarnrat entertained the huge galleries with a stunning final round of 65 to claim a share of sixth place with Hideki Matsuyama and Jamie Lovemark.

It was also a good day for McIlroy, who finished with a 65 that included a double-bogey and a total of seven under par. He shot 75 in rounds one and three but there was plenty of evidence that his game is not far away as he prepares to defend his WGC Match Play title and then challenge for The Masters at Augusta in April.

THE home crowd got the finale they hoped for as SSP Chawrasia and Anirban Lahiri went head to head in the final round of the Hero Indian Open at Dehli Golf Club, with Chawrasia emerging as the champion at the end of a glorious day.

Chawrasia has come a long way since starting life as a caddie in Kolkata and having to borrow a set of golf clubs to compete in the professional ranks. With a two-shot victory over india's best golfer, Chawrasia has secured a full-time return to the European Tour, won $276,660 and will now join Lahiri in representing India at this summer’s Olympics in Rio. It is a dream come true. 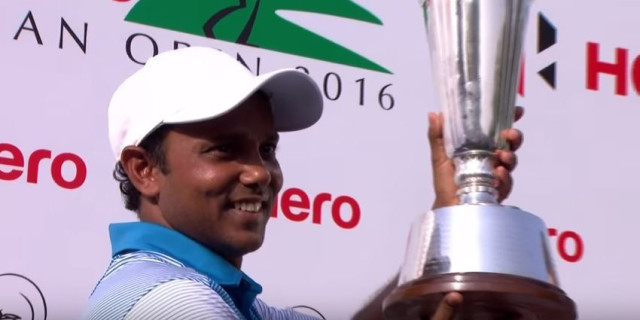 Chawrasia, who had won 14 times in India in his pro career and finished runner-up in his national open four times, produced some wonderful recoveries and holed a number of crucial putts on his way to a one under par 71 for a 15-under-par winning total on a course that demands accuracy from the tee.

The new champion was under intense pressure on the final hole. He had to get up and down from the rough from 70 yards, and put the ball four feet from the hole. When Lahiri failed to get up and down for a birdie on the par five, Chawrasia stepped forward to roll home his putt and win by two shots, ahead of Lahiri and J Wang of Korea.

Chawrasia's father was greenkeeper at Royal Calcutta Golf Club, where SSP taught himself how to play. He became a caddie and then turned professional, but had to borrow a set of clubs from a friend when he started competing in 1997. 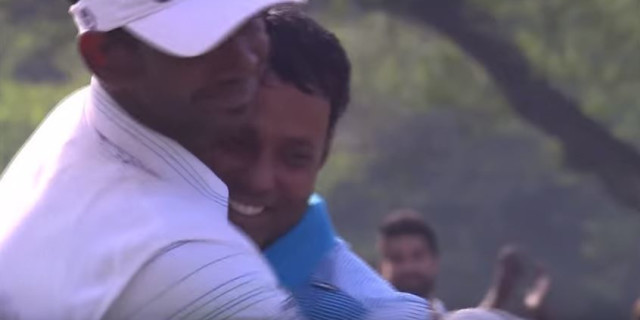 The champion was extremely emotional at the end and struggled to fight back the tears.  “It is a very important day for me. I have finished second four times in the Indian Open and every time that happened to me I wondered if I would ever be able to one day be the champion," he said. "This year, I came believing I had to win. I knew that I could do it.  There was a lot of pressure on me on the last hole but I had to say thank God when Anirban missed his birdie putt.  I played a great chip there and then when he missed I knew I would win the tournament.

“I think every Indian player looks at this tournament as the biggest. It is our national championship and a huge honour for me. Also, I think I have now qualified for the Olympics and the world cup and all of that was going around in my mind when I was playing today. It was a lot of pressure but I can relax and enjoy it now. My main goal was the Olympics so I am so happy. I am not sure how we will celebrate but I will leave that for my wife to take care of. She is very happy.” 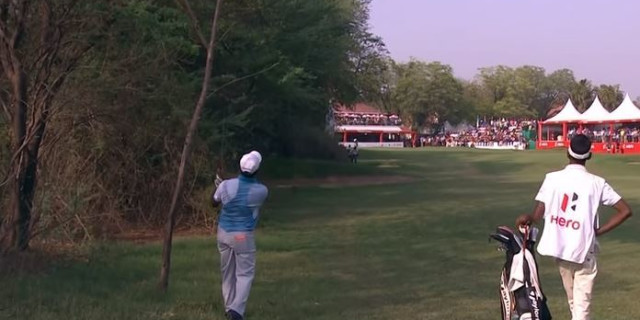 Lahiri was disappointed not to make a successful defence of his title, but how close he came.

“It was pretty intense out there. I got off to a great start but lost a bit of momentum after that. I gave myself a lot of chances but missed quite few from 15-20 feet but at the end of day, SSP hung tough and played very well," Lahiri said. "I made a good putt on the third and thought that was a great time to hole a long putt because I hadn’t made many this week. I just lost a bit of ground around the turn on eight and nine and then the back nine is so tight. It was a disappointing finish after a promising start for me, but I am so happy for SSP. This win is huge for him. We were tied for second three years ago, he was second last year and has been second four times at this tournament so it’s great for him to win and lock down the Olympics and everything else that comes with it. I am really pleased for him.” 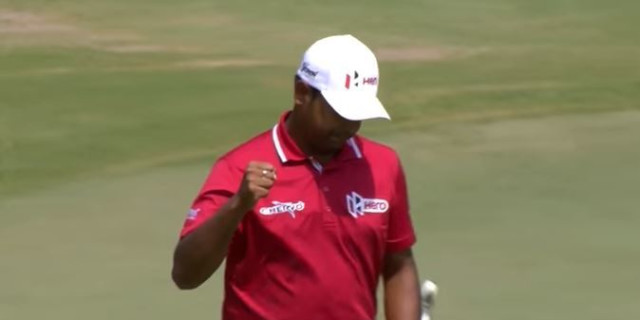 The top European finisher was Gregory Havret, who was tied for sixth on 278 after a final round of 68.