As we approach the end of a remarkable 2015, these are some of the resolutions we believe some of the world's top golfers will be making as they look forward to 2016. It is a year in which we expect Jordan Spieth, Jason Day and Rory McIlroy to continue to dominate, and one when we hope to see a certain winner of 14 majors return to fitness, good health and form... 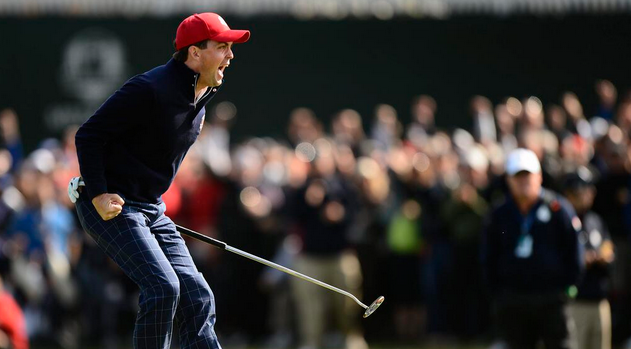 Rory McIlroy: To stop playing football - and get another putting lesson from Dave Stockton

Tiger Woods: To find a way to get fit, play a tournament, break 70 in all four rounds and win again

Sergio Garcia: To remember last year's resolution to enjoy his golf and lose graciously. It took a long time, but it was worth the wait to see Garcia accept his fate and play with a smile on his face

Rory McIlroy: To win The Masters

Lydia Ko: To ensure she doesn't kill interest in the women's game by winning all five of the game's majors

Andy Sullivan: To keep playing and winning with a smile on his face

Dustin Johnson: To find a way not to throw away a major

Adam Scott: To learn to love a 35-inch putter

Matthew Fitzpatrick: To not think about the amazing progress he has made so far - and carry on enjoying the journey

Keegan Bradley: To stop whining about the ban on anchored putting and prove to everybody he can adapt to a normal implement. And to speed up that awful pre-shot routine!

Patrick Reed: To stop swearing within earshot of a television camera or microphone and to actually reach the top five in the world rankings

Lee Westwood: To prove there is still lots of life in the old dog in his forties

Darren Clarke: To silence the doubters who believe he is the wrong man to captain Europe in the Ryder Cup

Jordan Spieth: To prove that 2015 was no one-off fluke

Ian Poulter: To accept he is 40 and start dressing accordingly and to stop posting pictures on Twitter of his latest Ferrari

Henrik Stenson: To keep his clothes on, to not break any clubs and to win a major

Victor Dubuisson: To tell us who he really is and reveal something of his background to us

Davis Love III: To devise a plan that will make the 2016 US Ryder Cup team competitive

Bobbing Watson: To try to stay on his feet when he hits that driver with the pink shaft

Blubbering Watson: To not blub if he wins The Masters again

Bible Watson: To not thank God if he wins The Masters again

Le-Bubba Watson: To play in the French Open and tell everybody how wonderful the Paris landmarks are – and go through them all by name. So, not “that tower thing” or “that art gallery”

Babbling Watson: To stop and think before opening his mouth and ensure that what comes out actually makes sense

To reduce your handicaps and love your golf in 2016