YOU have got to hand it to Tiger Woods. Even after shooting 80 in the first round of the US Open at Chambers Bay - including a topped approach shot and numerous hacks from the rough - there he was afterwards, still insisting that he was working on the right things. Hmmm.

Woods carded eight bogeys, one triple bogey and a solitary birdie in an opening 80, three shots more than his previous highest score while still an amateur in 1996.

The only consolation for the 39-year-old was that he outscored playing partner Rickie Fowler, who shot 81 despite being inches away from an albatross on the par-four 12th. With Louis Oosthuizen shooting 77, Woods’s group were a combined 28 over par.

“The bright side is at least I kicked Rickie’s butt today,” joked Woods. “I fought hard and that was my number. I could not have grinded any harder than that. I know when I do it right, it’s so easy. I just need to do it more often.”

Perhaps he should try working on the same things as Dustin Johnson and Henrik Stenson, who each reduced this monster to 65 blows. The pair took advantage of benign weather conditions and hole placements, and Johnson even complained afterwards that he left a couple of shots out there. He threatened to equal the lowest score in major championship history - 63 - when he reached six under par with two holes to play, but miscued a chip on the par-five eighth and bogeyed the ninth, having begun his round at the 10th

Phil Mickelson thrilled the huge crowds with a typical round - plenty of birdies, with a few bogeys thrown in for good measure. But the left-hander showed enough to make us believe that maybe, just maybe, this could be his year. And would you believe it? Right up there, with a one-under-par 69, is Colin Montgomerie, who is approaching his 52nd birthday. A three-time senior major champion, the Scot smiled and chuckled his way around, and left us believing that he could still be in the mix come Sunday afternoon.

Rory McIlroy played as well as either Stenson or Johnson. Unfortunately, he couldn't put for toffee. The 72 he shot was the worst he could possibly have recorded and although he was fairly upbeat afterwards, he will know that he let a great chance slip. 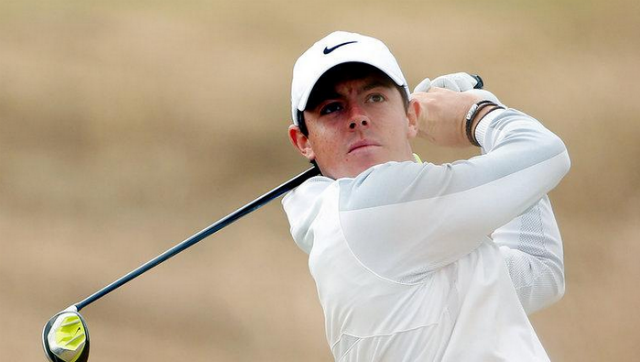 Precisely the opposite can be said of Jordan Spieth, who posted a 68 despite not being at his best. On a golf course upon which it is well nigh impossible to identify the greens from the fairways, Spieth had little trouble, rolling them in with his customary aplomb. Also on 68 were Francesco Molinari and Marc Warren, of Scotland. Don't be surprised to see Warren hanging around near the top of the leaderboard.

Stenson’s caddie Gareth Lord injuring his left wrist on Wednesday after falling on the course and Stephen Gallacher was forced to replace his caddie Damian Moore due to a leg injury suffered on the same day.

“Walking off the 16th he took the fall, both feet in the air, and got trapped with his wrist under the bag,” Stenson said. “He’s in a cast now. It might be broken or just torn ligaments.

“He’s not in a good place with the hand, but he managed to caddie and did a good job for me anyway. I had to caddie for him a little bit, as well. It’s definitely dangerous with those slopes and the grass gets shiny and lays down. It gets a bit like ice skating out there.”

With the USGA expected to put the flags in some rather more inaccessible positions for the second round, expect the fun and games to really begin.