ALL eyes will be on three men as the second major of the season tees off at Chambers Bay, a course which has already been the centre of much negative publicity before a shot has been struck in anger.

Ian Poulter took to Twitter to express his views, and made it perfectly clear that he was not looking forward to going there. I guess that means we can rule him out for a start.

Jordan Spieth and Rory McIlroy are the two best players on the planet, and we are all wondering if there is any chance of seeing these two gladiators going head to head with a major title on the line. And, with a morbid fascination, we will watch with our hands to our faces to see how Tiger Woods, his game in tatters, copes with what seems certain to be the toughest challenge for a major for many years. 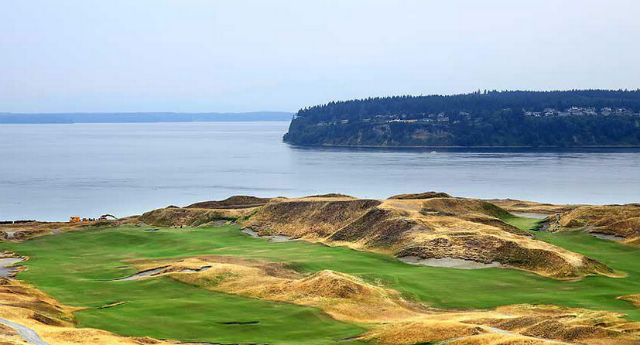 Woods, on current form, will do well to break 80, especially given what we have seen from his so far this season. He keeps telling us that all he needs is more tournament play, but all the evidence suggests he is kidding nobody but himself. An 82 at Phoenix and an 85 at Muirfield Village speak of a man in turmoil with his game. The most worrying thing for his fans was that he seemed to be once again suffering from the chipping yips at Muirfield, having seemingly got them out of his system at The Masters back in April. Back then, some of us thought that there was still some hope of Woods rediscovering his best form - nobody thinks that now.

We should probably make the most of any flourish he can produce because one thing is guaranteed - unless he can find a solution, and quickly, there is nothing more certain than the fact that he will walk away from golf. He plays this game to win and, right now, that looks as likely as Roy Hodgson telling the England football team to go out and "attack, attack, attack!"

So what of Spieth and McIlroy? Spieth won The Masters in spectacular fashion and has continued to play brilliantly ever since. He will be in contention at Chambers Bay because every time he competes he finds himself in the mix come Sunday afternoon. Additionally, there is no better putter on the planet right now, and nobody wins thew US Open unless they can putt.

McIlroy will probably never be as consistent as Spieth or as Woods was when he was in his prime. He arrives at Chambers Bay having missed the cut at the BMW PGA Championship and the Irish Open. It is hardly ideal preparation for a major championship being played on a course with narrow fairways and thick rough.

McIlroy and Woods are not the only ones with question marks surrounding their form. Adam Scott, one of the best ball strikers in the game, knows that anchored putting will be banned on January 1, 2016. Earlier in the season he tried to compete using a normal putter, but quickly returned to the broomhandle putter. His mind is all over th eplace and he is sliding down the world rankings.

There is one obvious contender. His name is Jim Furyk. He may be 45 years old, but he has already won this season and finished fifth in the Memorial, so he heads to the US Open in form. He is one of the straightest hitters in the game and he has rediscovered his putting stroke. Furyk is a former winner of this tournament and is a renowned grinder. Over the course of 72 holes, every player in the field will suffer bad breaks, and Furyk copes with that as well as anybody else in the game.

Another golfer who fits that bill is Justin Rose, the winner in 2013. He is not the straightest hitter in the world, but his iron play and short game are as good as anybody's. And, like Furyk, he is form.

If you are looking for a rank outsider, look no further than Francesco Molinari. Like Furyk, the Italian is monotonously accurate from the tee. Like Spieth, Rose and McIlroy, he hits iron shot after iron shot to the heart of the green. Unfortunately, like Scott, he suffers fragile confidence on the greens, and that will stop him winning. But he has every chance to being in the mix.

To win: Jim Furyk 40/1 Could be a memorable week for the veteran

Each way: Jordan Spieth 9/1 Will give it his best shot

Each way: Justin Rose 21/1 The tougher the course, the more he likes it

Jim Furyk. Will never again have a better chance

Jordan Spieth. Bound to be in the mix

Francesco Molinari. Can spring a huge surprise if he holes a few putts

Matt Kuchar. Could be his best chance

Kevin Kisner. He keeps knocking at the door

Rory McIlroy. Just got a feeling he will struggle

Jimmy Walker. Has the game to win

Jason Day. Time to get his season going