With the admittedly minuscule off-season now behind us, it’s time to turn our attention to the new golfing year. I know I seem to say this every January, but I’m convinced 2015 is going to be one of the most memorable seasons of the modern era. Here’s why…

Firstly, Tiger Woods has re-entered the fray after some four months away from the game - a break I feel he needed from both a physical and mental perspective. Of course, his golfing hiatus came as a consequence of a niggling back injury, and getting back to full fitness was the main priority, but I also think it will have done him the power of good in terms of re-evaluating career goals and re-kindling his love for the game. I don’t think it’s misguided to say he lacked a little motivation and looked a touch disenchanted during a thoroughly inauspicious 2014. A significant spell away from the intense spotlight of professional golf - something that’s never really been an option, a product of sponsorship, status and other factors - was just what Tiger needed.

He returned to action at the Hero World Challenge, shortly after announcing Chris Como - a man with expertise in the physical conditioning arena - as his new swing coach. It looks a much more sustainable action for someone with a creaking body, more controlled and slightly freer. Encouragingly, Woods was able to attack the ball with some power and hit a number of long drives on his return to action. If he can find more fairways, retain swing consistency and rediscover the legendary putting touch that defined his halcyon years, he could be dangerous again in 2015. Who knows, that much-anticipated rivalry between Woods and McIlroy could yet materialise. 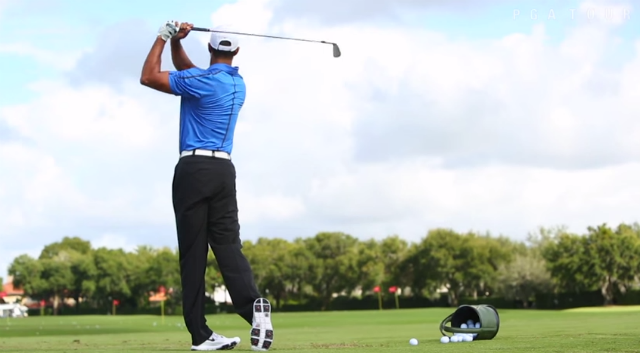 Elsewhere, there’s an outstanding young crop of golfers coming through the ranks and growing in stature every week – a collection of players who are more than ready to start winning major championships. Rickie Fowler, who finished inside the top five at all of 2014’s majors, can consider himself extremely unfortunate to be without a major title – purely a result of Rory McIlroy’s genius.

Jordan Spieth came close to winning The Masters en debut last year and produced a run of sheer brilliance in winning the Australian Open and Hero World Challenge in back-to-back weeks at the end of last season. Others to watch out for from an American standpoint are Patrick Reed, Patrick Rogers, Chris Kirk and Harris English. In Europe, look out for Victor Dubuisson, Jonas Blixt, Alex Levy, Matteo Manassero and Renato Paratore to continue to ascend up the world rankings. Further afield, the likes of Jason Day and Hideki Matsuyama are undoubtedly good enough to win major championships.

It’s the blend of youth and experience that makes the golf scene so intriguing this year. Alongside the huge numbers of twenty-somethings establishing themselves on the world stage is a selection of seasoned professionals looking to reinvigorate themselves as they enter the autumn of their careers. Lee Westwood is now 41, Luke Donald is 37 and Phil Mickelson only has five more years before he’s entitled to join the senior tour. It’s this eclectic mix – in terms of demographics, nationalities and skill sets – that means the world of golf is poised for yet another spellbinding season.

But, who will win the big four? Below, I give my predictions….

All the talk ahead of The Masters will focus on Rory McIlroy’s quest to complete the career grand slam at the age of 25. There’s no doubt he’s the best players in the world at the moment, and by some margin, but that’s no guarantee of future success. As we all know, McIlroy is a golfer who’s capable of sheer brilliance when he’s on form, but when he’s off, he’s off. He hasn’t yet developed that Tiger-esque ability to win tournament when he’s not playing his best golf. Still, his game, centred on driving and aggression, is ideally suited to Augusta. That said, I like the look of Henrik Stenson at the Masters. His high ball flight, combination of distance and accuracy and past record make me think he’s going to break his major duck in around about four months’ time.

Jim Furyk is a player who seems to be getting better with age. I know his victory tally isn’t what it should be and he has a habit of snatching defeat from the jaws of victory, but he competed more consistently than almost any players last season. He’s still extremely driven, he’s vastly experienced and he’s an expert course strategist with past experience of winning the US Open (2003). The world number six ranked 1st last year on the PGA Tour in scrambling, 2nd in top-10 finishes, 3rd in strokes gained and 4th in driving accuracy. That’s the pretty mean set of statistics aligned perfectly to success at the US Open.

Granted, question marks remain about Adam Scott’s putting, but I can see him registering a maiden Open Championship this year at St Andrews. The Australian is one of the best ball-strikers in the world game and his aggressive disposition, coupled with driving accuracy and length, means he’s got a great chance at the Home of Golf. Harrowing memories from that excruciating final-round collapse at Royal Lytham & St Annes in 2012 should provide extra motivation.

If Jason Day stays injury free for the entirety of 2015, I think he’s got a great chance of recording his first major championship. He’s already a WGC winner and his past performances in golf’s big four events suggest it’s only a matter of time. He’s obviously figured prominently at The Masters over the past couple of seasons and many will fancy him at Augusta this year, but he’s more than capable of winning any major. This year, the PGA Championship returns to Whistling Straits in Wisconsin – a long course that will suit creative and imaginative players with every shot in the bag. That’s Day down to a tee.