Here at Golfshake HQ we have been gazing into our crystal balls, sorry, ball and having a look at what may and may not happen during 2015. We are going to give you some names to look out for and some predictions, but we start with some 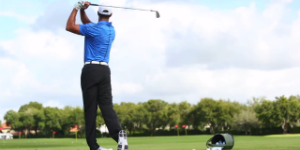 of the things we know that golf commentators, writers and pundits will be saying...

"And so another year passes without Tiger Woods adding to his 14 majors."


"Tom Watson makes the cut at his final Open Championship and receives a standing ovation as he walks down the 18th fairway at the Old Course for the final time."

"John Daly shoots an 88 and withdraws."

"Steve Stricker has been named captain of the US Ryder Cup team for 2016."

"Darren Clarke has been named captain of the European Ryder Cup team for 2016."

"Lydia Ko becomes the youngest multiple major winner in women's golf."
And some of things you will not be hearing....

"It has been confirmed that Dustin Johnson was banned for six months last year."

"Darren Clarke will leave no stone unturned in his search for perfection at the 2016 Ryder Cup."

"Steve Stricker will be speaking to Tom Watson for advice about the Ryder Cup."

"Tiger Woods has announced he is working with Butch Harmon again and has Steve Williams back on his bag."

"Adam Scott wins the US Open using a 35-inch putter."

"Keegan Bradley praises the PGA of America and the R&A for banning anchored putting."

Who will win what?

The FedEx Cup winner has millions in the bank and his two late victories will mean that the eyes of the world are on him. It is a huge year for Horschel as he sets out to prove that it wasn't a flash in the pan. In many ways, he will be under more pressure now than at any stage in his career.

Hugely talented and promising young American who looks to have it all and is now firmly ensconced in the world's top 50 after an astonishing run of results in 2014, capped off by his brilliant victory in the Turkish Airlines Open. Having proved himself on the European Tour, watch him go on home soil in 2015

Uihlein took the hard way to learn his trade when he could have taken the easy way. His father is the head honcho at Titleist and could have opened doors for his boy, but junior chose to head to Europe, where he quickly proved himself. Now he has to do the same thing in his own back yard

Now righttully reinstalled as the world No 1, McIlroy will be under intense pressure to win The Masters in April and complete the career Grand Slam at the tender age of 25. Is he really only 25? He will win at Augusta, but probably not in 2015. However, given decent weather, he should stroll to victory in The Open at St Andrews

Having finished in the top five in all four majors during 2014, Fowler will be determined to go one better in the new year. He has a brilliant all-round game, but he really does need to find a way to finish off more tournaments. Augusta National should be perfect for him, and don't be surprised to see him win several times in 2015

Due back in golf in the spring, Johnson has many questions to answer. Will he tell the world the real reason for his absence? Has he sorted himself out? Will he be as good as he has always threatened to be?

The Frenchman is ready to take the next step. He is already a great player, blessed with sublime recovery skills, and when he realises it is not necessary to hit every drive as hard as he possibly can he will become a world-class player. He already has a short game that is the envy of most of his peers

Whisper it, but the man who told us he believed he was already a top five player, might be as good as he thinks he is. He really came of age in the Ryder Cup, when all Americans around him were losing their heads. He refused to be cowed and gave several Europeans a bloody nose - it won't be the last time he does that

Spieth looked like ending 2014 as the nearly man of golf. It seemed that he was in contention just about every time he teed off, but he was unable to secure that all-important second PGA Tour title. And then he went to Australia, shot a final round of 63 and locked up the Australian Open. The following week he was back in America, shooting another 63 and winning Tiger's Hero World Challenge. We always said that when he won again, the floodgates could well open

The young Italian (he is not 22 until April) had a disastrous 2014. It came as big surprise for a player who has enjoyed sustained success since turning professional - the youngest ever winner of the European Tour, the youngest to win twice, the youngest to win the BMW PGA Championship. Hopefully, this has been a brief hiccup and he will bounce back to his best in 2015 but in this game there are never any guarantees