Inspired by the Calendar Girls an Essex golf club is raising thousands of pounds for Cancer Research UK.

Southend Golf Club’s annual fundraiser has never been a conventional affair, preferring to keep things interesting with a series of events that are fun to participate in, create interest and generate plenty of money for charity.

The latest scheme is called #nomownate and it's the brainwave of Ian Southgate, head of the club’s charity committee.

It’s an original idea which uses the power of social media whilst also capturing the essence of the famous antics of the Women’s Institute group from the Yorkshire village of Rylstone, who posed for a series of cheeky, nude photographs which they then used to produce a calendar that raised funds for the local leukaemia ward. 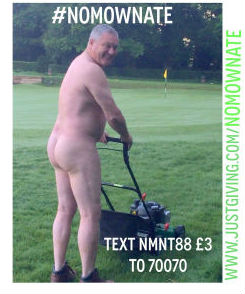 Not only did their calendar sell out, but the world’s media descended on the village and the story was transformed into a successful film, starring Helen Mirren and Julie Walters.

“Our challenge is a bit simpler,” says Southgate, from Leigh on Sea. “You take your clothes off, grab the lawnmower and snap a photograph. Just make sure you keep it cheeky! Nothing rude, just like the Calendar Girls.

“Then you post the picture to social media, donate £3 and #nomownate three friends to join in.”

The donation process is simple: you either visit www.JustGiving.com/nomownate or text NMNT88 to 70070.

If golfers taking their clothes off has a familiar ring you might recall recent editions of Sports Illustrated’s body issue, which has seen the likes of Sandra Gal, Suzann Pettersen and Belen Mozo celebrate their athleticism and grace as nature intended.

The Southend golfers perhaps more closely resemble veteran Gary Player, who took part last year, but the number of crunches and sit-ups required to perfect their toned figures is a closely guarded secret.

“#nomownate is easy and the response from the guys has been amazing,” continues Southgate. “They’ve been getting really creative and sometimes it is the least likely golfers who seem to have had the best fun producing a great shot!

“We’ve had photographs sent from all over Essex, but we’ve also had some from across the country and a few were even taken overseas. It’s been great fun seeing what people have been getting up to.”

Cancer Research UK is the chosen charity of 2014 club captain Colin Wyatt and the annual activities have a history of generating impressive sums of money.

“Last year, for example,” says Southgate, “we raised £11,500 for The Lily Foundation, which raises money for research into Mitochondrial Disease and other metabolic disorders. We’re pleased we can fund-raise whilst enjoying one of the social highlights of the year.”

The campaign peaks, as every year, with the club’s week long Beer and Music Festival (3rd-7th June), but the potential for #nomownate has no limits.

Southgate says: “We kicked it off in the middle of May and we’ve already raised over £2,500, including the Gift Aid contributions.

“Any golfers from around the country or the world, can join in - the more the merrier! We think it’s a great way for golfers to have a bit of fun and contribute to a great charity.”