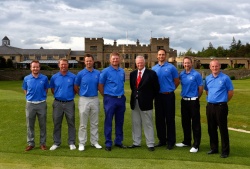 The excitement is building at De Vere Slaley Hall ahead of this week’s hosting of the prestigious PGA Cup matches between GB&I and the United States of America.

The renowned tournament venue in Northumberland is once again set to underline its tournament credentials as it welcomes a selection of the world’s leading club professionals for three days of intense competition. Starting on Friday (20th September), the PGA Professionals equivalent of the Ryder Cup will see two days of thrilling morning foursomes and afternoon fourball match-ups ahead of the deciding Sunday singles matches.

The biennial contest celebrates its 40th anniversary this year, with the US team dominating proceedings in recent years following three consecutive victories; however the GB&I team of rookies will be looking to strike back on home soil.

Having not lifted the trophy since 2005, the Great Britain & Ireland team which is made up of ten players making their PGA Cup debut, will be looking to claim a historic victory at Slaley Hall this weekend. They will be captained by Russell Weir, who played a record-equalling eight times in the contest and will be looking to impart his wealth of knowledge onto his talented side. His line-up includes former European Tour player Benn Barham, and Dan Greenwood, who claimed the Glenmuir PGA Professional Championship at De Vere Slaley Hall back in June with a stunning nine-stroke winning margin. The team hope that their experience from playing the magnificent Hunting course under full tournament conditions will stand them in good stead and give them the upper hand over the American team.

In comparison, the USA team features 4 PGA Cup veterans who have played in eight overall PGA Cups and bring a host of experiences to the team. This includes Mark Shaftic and Mike Small, who between them have competed in an impressive eight Major Championships. The team’s experience is matched by a host of talent amongst the six rookies who boast impressive résumés, including reigning PGA National Champion, Rod Perry, who has teed it up in no fewer than 15 PGA Tour events. The side will be captained by Allen Wronowski, Honorary President, The PGA of America, who hopes to continue the winning momentum for the American team across the 7,036-yard championship layout designed by the late Dave Thomas, renowned golf course architect.

Admission and parking is free for all spectators across the three days of the event (Friday 20th – Sunday 22nd).