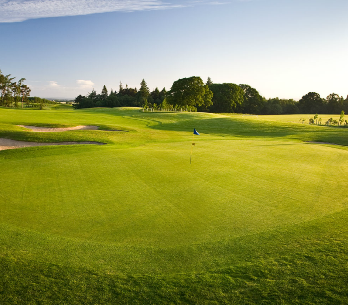 contested PGA Cup matches between Great Britain & Ireland and the United States of America. Following the successful hosting of the 2013 Glenmuir PGA Professional Championship in June, which finalised the GB&I side, The Hunting course at the renowned Northumberland resort has remained in immaculate condition ahead of the hotly-anticipated event. The biennial matches will headline the tournament calendar at the North East resort from Friday 20th – Sunday 22nd September, as it once again underlines its credentials as one of the UK’s leading golf resorts.

The PGA Cup holds pride of place at the pinnacle of club professional’s golf, as it pits the leading talent from both sides of the Atlantic against each other for three days of hard fought competition. The event represents the most high-profile professional golf tournament in the region this year and with free admission provides the local golfing public the opportunity to witness an exciting Ryder Cup style format across the three days. The GB&I team will be looking for strong support at Slaley Hall, as they look to arrest the trend of US victories, with the Americans claiming victory at each of the last three editions of the event.
Steve Cram, Slaley Hall’s Golf Course and Estate Manager, ensures that the golf courses are prepared to the most exacting of standards, evidenced by a thorough programme of renovations and drainage improvements during the winter months. Through such rigorous processes, Slaley Hall continues to attract leading professional tournaments regardless of the time of year or weather conditions, and is highlighted by the 15 European Tour and European Senior Tour events the resort has welcomed over the years.
The Hunting has welcomed a plethora of leading players in that time and crowned an illustrious list of winners that includes the likes of Lee Westwood, Colin Montgomerie and Retief Goosen.
When De Vere Slaley Hall hosted the Glenmuir PGA Professional Championship in June, it marked the completion of a two–year qualification process. The event provided the eventual GB&I team members the opportunity to experience the 7,036 yard, par 72 Hunting Course under tournament conditions, in advance of the PGA Cup. Eventual champion, Dan Greenwood, will spearhead the team following an impressive nine-stroke victory, adding his name to the wealth of talent due to assemble in September.
Keith Pickard, Regional Golf Director, De Vere, is delighted with the condition of the course and looking forward to welcoming yet another top-level event to the resort. “The golf courses are always maintained to the highest possible standards and provide a thoroughly enjoyable test for golfers of all abilities. Steve Cram and his team need to be congratulated for their continuous efforts in maintaining the Tour standards of both The Hunting and The Priestman courses. We are excited to welcome the leading club professionals from both sides of the Atlantic and looking forward to three days of hard-fought and entertaining competition. With admission and parking provided free of charge for all three days, we expect to welcome an enthusiastic crowd to watch the action unfold.”
Highlighting the quality of the field will be several notable players, such as PGA Cup veteran Mike Small. Small, who has competed in five major championships, is the current head golf coach at the University of Illinois and a three-time winner of the American PGA Professional Championship. Representing GB&I will be the likes of Benn Barham, a European Tour card holder as recently as 2010.