Trevino weighs in on Anchoring as speculation grows on a decision

After having the 'yips' at the recent Liberty Mutual Legends Golf, Lee Trevino turned to the belly putter to get him through 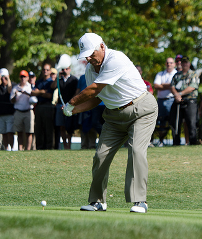 the rest of the tournament. The results where great with his putting returning to a more acceptable lethal. His change in fortunes on the greens following the switch of putter has left Trevino in no doubt about what difference an anchored putter makes:

"Now I see why they want to make this one illegal," he added. "It's like cheating. I swear to God. This is the easiest thing I've ever seen to putt with, is that belly putter."

When asked about Bernard Langer's stunning form this year and the impact that the long putter makes on the Germans game Trevino said:

There's no question he wouldn't be playing like he is if it wasn't for the long putter," Trevino noted. "It takes all the pressure out."

Reports suggest that the games governing bodies will make a final decision on anchoring in the next few days following a 90 day consultation period with the games major tours. The prospect of a split within the games highest echelons has been  increased with the PGA Tour announcing its opposition to the ban.