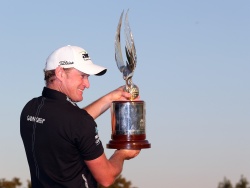 Jamie Donaldson gave Galvin Green the perfect start to the 2013 Tour season with a thrilling win at the Abu Dhabi HSBC Championship that will put the popular Welshman into the top 30 of the official World Rankings.

His second European Tour win inside six months saw him overcome the challenge of world No.5 Justin Rose and Thorbjorn Olesen and gain the €336,726 first prize to move into second spot in the Race to Dubai.

In the desert heat, Donaldson stayed cool in his Ventil8 clothing to move two shots ahead of the field with five birdies in the first 17 holes, only to bogey the last and await the outcome of the last match to see if a play-off was needed. But both Rose and the young Dane missed putts at the 18th and the Irish Open champion had climbed the rankings.

"I'm very happy to be stood here with the trophy," said Jamie, who thought the course was too difficult when he played in the Pro-am on the eve of the event that saw Rory McIlroy and Tiger Woods miss the cut.

How Much Do You Know About The PGA Championship