In The Bag - Shane Lowry 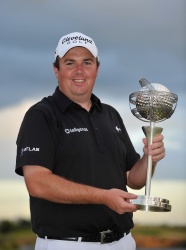 Cleveland Golf and Srixon are celebrating another European Tour victory after Shane Lowry won the Portugal Masters at the Oceânico Victoria Golf Club this weekend.

The highlight of the round for Lowry, was an eagle at the par-4 11th hole, holing out from the fairway with his 588 CB 7-iron.

Lowry, who has moved up to 29th place in the Race to Dubai after receiving a cheque for €375,000, now qualifies to play in the WGC-HSBC Champions tournament at Mission Hills next month as well as the 2013 Volvo Golf Champions next season.

After the victory, Lowry said: “I cannot believe this. I can’t explain how I feel really. It’s a dream come true – I’m over the moon. Everyone was referring to me as the fella who won the Irish Open as an amateur but now I’ve won such a prestigious event I don’t know what to say.”

Shane Lowry In The Bag