The Faldo Series has announced its largest ever field for the sixteenth Europe Grand Final which tees off in Northern Ireland on September 11-13.  A total of 89 golfers from 19 countries will join Sir Nick Faldo at Lough Erne Resort for the 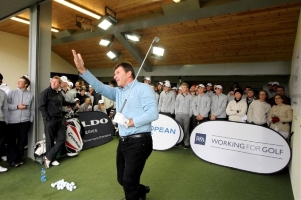 “The 2012 Grand Final will be a wonderful climax to a record year that has seen the Series visit 14 countries across the UK, mainland Europe, the Middle East and South America,” commented Faldo.  “With our Asia Grand Final winners also taking part, I’m looking forward to passing on my experience to our largest-ever field.”

“Last year was a special experience and opened so many doors for me,” said the reigning Girls’ Under-16 champion Natalia Heckova, 16, who last year became the first-ever Slovakian to win a Faldo Series title and qualified for the Asia Grand Final in China.  “I can’t wait to get back to Lough Erne Resort, learn even more from Sir Nick and hopefully produce another strong performance.”

Competitors aged 12 to 21 will contest for the title over 54 holes on the Faldo-designed course at Lough Erne Resort.  The six-time Major winner will arrange for the leading boy and girl overall to play in a professional Tour event.

With the field divided into five age-groups – three for boys and two for girls – each age-group winner will also be invited by Faldo to compete in the 2013 Asia Grand Final at Mission Hills Golf Club in China next March.