Kyson Lloyd of Wellingborough won the eighth and final Faldo Series UK Championship of the 2012 season at Hollinwell Golf Club in Nottinghamshire.  The 20-year-old Englishman fired a tournament-low 67 on day one and followed it up with a 75 in wet weather to win by four. 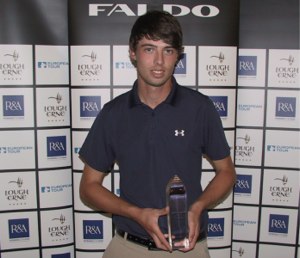 “This is undoubtedly the best victory of my career so far,” said Lloyd, who qualifies for the 16th Faldo Series Grand Final at Lough Erne Resort in Northern Ireland on September 11-13.  “Every part of my game was in great condition this week and hopefully I can carry this form on to the final in two weeks’ time.”

Other age-group winners heading to the World Amateur Golf Ranking event at Lough Erne are Arrun Singh Brar of Bramshaw (Boys’ Under-16) and Cosby’s Alastair Kinnaird (Boys’ Under-18).  Joining them will be the two top girls, Melissa Nicol of Moor Hall and Fulford’s Charlotte Austwick, a finalist back in 2007.

For more information on the Faldo Series visit www.nickfaldo.com.