THE European Tour’s UK Swing continues with the Hero Open. Originally announced as the English Open, the newly named Hero Open takes place at the Forest of Arden Marriott Hotel and Country Club near Birmingham.

After changes to the 2020 Race to Dubai schedule which means some Hero Challenges will not go ahead as planned, Hero continue to build on their relationship with the European Tour by supporting the UK Swing.

The announcement further strengthens the relationship between the European Tour and Hero MotoCorp, with the latter recently having announced an extension to its commitment to the Hero Challenge until 2022, which sees European Tour stars go head-to-head in an innovative shootout under lights in iconic locations across the globe.

At a time when sponsors are understandably thin on the ground, Keith Pelley, the chief executive of the European Tour, said: “We are thrilled to strengthen our partnership with Hero MotoCorp during the upcoming UK Swing, particularly with the support they have shown as title partner of the Hero Open. We are delighted to have their continued commitment during these unprecedented times, and we must thank Dr Pawan Munjal for his vision as Hero continue to help us showcase our fantastic game to the rest of the world.”

Pawan Munjal, chairman and chief executive of Hero Motor Corp, and one of India’s foremost businessmen, said: “Golf is the sport of business, which is why Hero is such a strong supporter of the game globally. The world is currently going through an unprecedented period due to the Covid-19 pandemic. I am confident that we all together will come out of this situation much stronger and more resilient. The UK Swing once again demonstrates the European Tour’s ability to be innovative and Hero is delighted to support this initiative.” 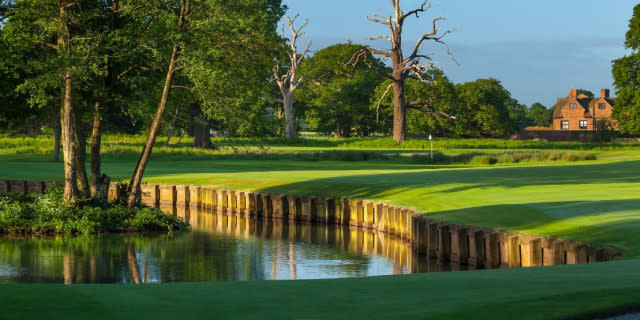 Looking at the Arden Course, designer Donald Steel explains the development process and describes what the venue was intended to be.

"I did a lot of work for Ashton Court Leisure (Bristol), Country Club Hotels, Whitbread Hotels who ultimately became Marriott. It was chain a which believed in hotels with golf courses - hence St Pierre, Tudor Park, Goodwood (Park course), Breadsall Priory and Dalmahoy. I worked at them all but Forest of Aden was the most high profile.

"Originally, it was a short course in Meriden which didn't warrant an entry in the Golfers Handbook or Course Guides. Some of the land was used during the war - hence some of the concrete bases of military huts not far below the grass surface. Some of the new land was the deer park belonging to Lord Aylseford, whose home, Packington Hall, is almost in site of the clubhouse. Much of the Estate was open to the public for fishing in lakes that had been, I believe, sites of extraction for sand and gravel.

"Some of the lakes conveniently formed features for the golf course. I think the land is still owned by the estate.

"The other joy was that a great deal of extra land was made available for the golf which was so enjoyable to design. The Aylesford Course also had to be designed to start and finish around the hotel which Whitbread's enlarged to provide a real golfing destination not far from its competitor - The Belfry.

"It is the scale of the land and its natural character which dictates its golfing challenge and Forest of Arden had all of that plus some pleasant variety. It was immensely reassuring that it was considered suitable for top class professional events plus a course to give enjoyment to all members, hotel guests and visitors. When several professional events were staged in the UK, it became a popular venue with a splendid hotel to match."

Thorbjorn Olesen is in the field, with a point to prove to himself, his fellow players and his many fans. The 30-year-old Dane has had a year he will want to put behind him as quickly as possible. He is facing three criminal charges – sexual assault, common assault and being drunk on an aircraft – stemming from an incident on a flight from Nashville, Tennessee, to London after last summer's WGC-FedEx St. Jude Invitational in Memphis.

The tour suspended Olesen on August 6 last year. He was due to appear in court in May but with his case delayed until December 2021 because of the Covid-19 pandemic, his suspension has been lifted, allowing him to focus on what he does best.

“While my team and I initially agreed that I would not participate in Tour events while the legal proceedings were outstanding, I am naturally grateful to the European Tour for allowing me to continue my career following the lengthy adjournment of my trial,” Olesen said.

“I am incredibly sad about what has happened and would like to apologise to all the Danes who have supported me for so many years,” Olesen said. “I basically haven’t played golf in a year. I played for a week in November in Spain, and then I’ve been playing for the last couple of weeks – that’s it. Since I started playing, I’ve never had anything like that where I haven’t played in such a long time. It’s hard.”

Also in the field is the extraordinary Spaniard Miguel Angel Jimenez, still a formidable competitor at the age of 56. He would have won in Austria a couple of weeks ago had it not been for a poor third round and clearly still believes that he is good enough to compete on level terms with guys who are young enough to be his sons. He is already the oldest winner on the European Tour - he was 50 when he triumphed at the Espana de Open in 2014. Jimenez was never one of the longer hitters on tour and has lost little distance.

His success depended on his accuracy with his irons and he still remains one of the best in the business in this department - and is still a wizard around the greens. He has had his struggles on the putting surface but has come up with a way that works for him. Jimenez uses a left hand below right claw grip and continues to hole his share of putts. Do not be surprised to see him in the mix again this week.

Dutchman Joost Luiten showed some excellent form in the two tournaments staged in Austria before the proper action got back under way and is determined to be part of Padraig Harrington’s 2021 Ryder Cup team. For that to happen, he needs to start winning.

Alex Levy. Capable of some incredible bursts of scoring

Thomas Detry. Really should be a regular winner

Thorbjorn Olesen. Delighted to be focusing on golf again