Pablo Larrazabal produced one of the most heart-stopping victories in European Tour history when he won the Alfred Dunhill Championship at Leopard Creek by a single shot from Sweden’s Joel Sjoholm. Barely able to walk as a result of agonising foot blisters, he tumbled down the leaderboard, dropped five shots on the front nine, threw in a double-bogey and had just about given up. But he dug deep and three late birdies secured him the most unlikely of wins.

He later revealed how close he came to withdrawing. “I woke up this morning and didn’t think I was going to play. I couldn’t put my shoes on, I couldn’t walk to the putting green,” he said. “Then I said to myself at the turn, ‘If Tiger Woods can win a US Open with a broken leg, then what is a blister?’ It has been a long and hard struggle for me in recent years. This is where I want to be. To win here is so special. It is a course I really love.

“I played well on the back nine all week. I couldn’t play any golf on the front nine but I played with heart on the back nine. I have worked so hard for this and have put in so many hours. This is so special."

Larrazabal began the day three ahead but got off to the worst possible start, dropping three shots in the first five holes and by the time he walked to the sixth tee he was tied for the lead with Wil Besseling, a 33-year-old Dutchman whose best finish on the European Tour was tied third at the Madeira Open way back in 2009.

The fiery Spaniard was clearly struggling to keep his emotions in check.  The sixth is a 311-yard par four, which is the second-easiest on the course. Larrazabal went for the green but found a bunker. Could he get up and down for his first birdie of the day? He produced a majestic shot and holed the putt to move back to nine under. Besseling matched him and then came up short at the par-three seventh and dropped a shot. But Larrazabal’s day went from bad to worse as he dumped his tee shot into the lake. And took five.

Suddenly, Besseling was leading on eight under. And now the tournament was wide open, with Zander Lombard, Branden Grace and Joel Sjoholm all on six under. Sjoholm almost didn’t play this week but was now delighted he had made the trip to South Africa.  The Swede last played a full season on the European Tour in 2012 and has been struggling to make a living on the Challenge Tour. Victory here would change his life.

There was more drama at the eighth. Besseling drove into a bunker and then hit a wild second shot that finished in the scrub at the base of a tree. It was a case of shut your eyes and hope for the best and, somehow, he managed to find the green and two-putted for the bogey of the day. Larrazabal also dropped yet another shot to tumble back to six under - five over for the day.

Up ahead, Sjoholm was dropping his first shot of the day at the ninth to fall back to five under. Leopard Creek is an unforgiving course if you are not on top of your game, and the next one to find that out was Lombard, who hit his second shot into the water at the ninth and dropped two. Grace also dropped a shot at the same hole.

Besseling (seven under) led Larrazabal by a shot, with Justin Harding two adrift playing the back nine, alongside Grace, Lombard and Sjoholm. A despairing Larrazabal hit a horrendous duck hook at the par-four ninth, through his driver to the ground and removed his shoes. He had been complaining of suffering from blisters on his feet and was now clearly struggling even to walk. His race seemed to be run as another shot dribbled away and he reached the turn in 41. Besseling led by two. 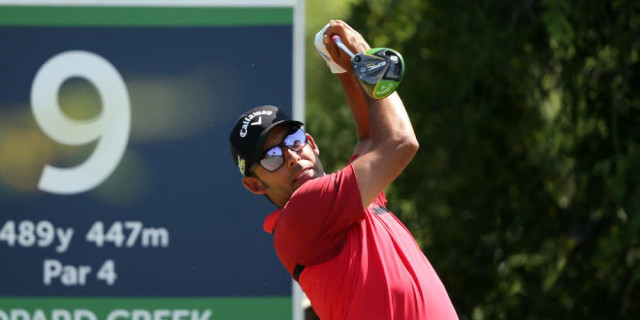 Sjoholm, Lombard and Grace all birdied the 11th to close the gap on Besseling to one.  Besseling birdied the same hole to extend the lead to two again and Larrazabal followed him in.

Everything changed at the 14th, where Besseling dropped two shots and was overtaken by Sjoholm, who was playing ahead of him and birdied the 11th and 13th to move to seven under. He was one ahead of Besseling, Grace and, incredibly, Larrazabal. The Spaniard had dropped yet another shot at the 13th but made a brilliant birdie at the 15th to return to six under and, seconds later, playing partner Besseling birdied the same hole to tie for the lead again. Much of it had not been pretty but the tension was tangible.

The pain of Larrazabal’s blisters disappeared when he holed a magnificent birdie putt at the par three 16th. Unbelievably, despite a round that had included seven bogeys and one double-bogey, he was tied for the lead once more.

Sjoholm eschewed the temptation to take a driver at the last and was counting his blessings when a poor third short clung on to the edge of the green - had he hit it six inches further right it would have finished in the water. In the end he had to settle for a par. His 69 meant he set the clubhouse target at seven under. Would it be good enough?

Lombard removed himself from the equation when he put his second shot into the lake. And worse was to come - he dropped another ball and promptly dumped that into the lake too before finally finding the green in six and taking two putts for a soul-destroying eight. Next to try was Grace, who needed a birdie at the last to join Sjoholm on seven under, but could only manage a par.

And so it all came down to Larrazabal and Besseling, both tied with Sjoholm coming down the last. The Spaniard finished in the rough and had to lay up. Besseling also missed the short stuff but found a perfect lie and chose an eight iron and struck what seemed a perfect shot but it was a fraction to hard and rolled over the back, coming to rest amid the stones. Larrazabal’s lay-up found an uphill lie and he produced a stunning third shot to three feet.

As Larrazabal paced about like a caged tiger, Besseling could only move the ball forward by about four feet and his next effort rolled eight feet beyond the cup and he missed the next to drop a shot and fall back to six under. Now the Spaniard faced a putt to win and, with it, his fifth European Tour win, one he will never forget. He came home in 34, a stunning performance when you consider what he went through on those opening nine holes.

On a scorching hot day at Leopard Creek, most of the field took advantage of a relaxation in the dress code that allowed the players to wear shorts. And the question does have to be asked - why on earth are they normally forced to wear trousers?

One of the most encouraging performances came from Charl Schwartzel. The South African former Masters champion was making his first competitive appearance in seven months. He suffered a debilitating wrist injury that contributed to him missing nine cuts in 12 starts before deciding that he’d had enough. He arrived at Leopard Creek saying that he still wasn’t 100% fit.

But that didn’t stop him making a charge in the final round. He came to the 72nd hole on five under. It is a par five that features an island green and has witnessed some horrors over the years. Schwartzel knew that if he could somehow find an eagle he just might secure an unlikely victory. He struck a huge drive but still had to negotiate the water. And he did so in style, rifling his approach to 10 feet. Sadly, his eagle attempt slid by and he had to settle for a 70 and a four-round total of six under par.

"The wrist was still extremely sore and I didn't think I'd tee it up but when I got here it was very manageable," Schwartzel said. "It fluctuates. It's a nerve, and once it gets entrapped too much, the probability of my stopping will be very high. But if I can keep it moving, I'll hold on as long as I can.”

A key factor to the timing of Schwartzel's return was the venue. Leopard Creek has been one of his favourite layouts during his career - he has won four times here, most recently in 2015, along with four runner-up finishes. "If I was ever going to make a comeback, this was going to be the best place for me to start," Schwartzel said. "I'm not 100% as I would want it to be, but I had a few good weeks practicing in America, so I thought I'd come down.” Schwartzel will receive a major medical extension when he returns to action on the PGA Tour, equipped with 12 starts to earn 263 FedExCup points in order to maintain his fully exempt status.

He admitted before his injury that he had stopped enjoying the game and this break may well turn out to be the best thing that has ever happened to him.

The round of the day came from Daniel Von Tonder, whose 68 moved him up to four under par. Spare a thought for Marcus Armitage - playing with Sjoholm, he had a truly dreadful round of 83.