What Do You Make of it So Far?

So what do you make of it so far? Thirty of the world's leading players are competing in the Tour Championship at East Lake and for one man there is the chance to walk away with a cheque for $15m and the FedEx Cup. But just try and work out who that might be if you dare...

Get this (and I really don't) - the man who finishes with the lowest 72-hole total on Sunday may not be the champion. In fact, he may not even win the tournament. Justin Thomas began the tournament on 10 under par before a ball had been struck. He opened with a level par round on Thursday, yet still found himself tied for the lead with Xander Schauffele, who shot a 64, and Brooks Koepka, who had a 67. This is because Koepka began the event on seven under, while Schauffele was three under.

Are you keeping up? Good. I am glad that somebody is. There has been untold confusion in the past when it comes to working out the permutations. There were three tournaments leading up to East Lake, with the top 30 competing in the season-ending Tour Championship. Working out the overall champion required calculations that would have troubled Einstein. So the PGA Tour decided on what amounts to a handicapping system.

Essentially it means that the player who started the week in 30th place would need to finish 11 shots ahead of Thomas to beat him. And even that would not be enough to guarantee victory. 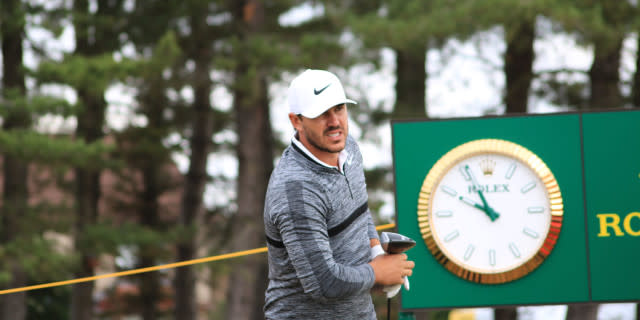 Previously, FedEx Cup points were reset ahead of the season-ending Tour Championship. It meant the two events could be treated as separate competitions. Not any more.

And here's the most complicated thing of all. The player who finishes the week with the lowest score will probably NOT win the tournament because the PGA Tour, in its infinite wisdom, has decided that every player should be given a stroke-based advantage based on their position in the standings. By his own admission, Thomas has had a poor season, but he was lucky enough to win the BMW Championship and that was good enough to take him to the top of the standings.

While Thomas started the week on 10 under par, Patrick Cantlay was eight under, Koepka seven under, with Patrick Reed and Rory McIlory starting on six and five under respectively - that means McIlroy will need to finish six shots ahead of Thomas and hope that he can also overtake Reed, Koepka and Cantlay.

Players positioned sixth to 10th in the standings started on four under, with every five in the field thereafter starting a stroke further back until they are on level par.

It is, of course, a sop to sponsors and TV, but the bottom line is that is a totally contrived format that fails to reward those who have played consistently well all season, such as McIlroy.

And the Northern Irishman is unconvinced that they have got it right. Join the club Rory.

"You can shoot the best score of the week and not win the golf tournament," he said. "If that happens to someone it's going to be hard for them to wrap their head around."

"There isn't a person on the planet that's experienced this before, for the stakes it's for," said American leader Thomas. "I'm just going to try to deal with it the best I can."

The "Starting Strokes" format has been introduced with the intention of eliminating the confusion of past FedEx play-offs, when the winner of the final tournament was often different from the series champion.

McIlroy says he has spoken to sponsors about how the FedEx Cup's "legacy" compares to golf's four majors. Referring to the PGA Tour's intention for the tournament to have a legacy as the final element of the 'season of championships', the run of tournaments that takes in the Players Championship, four majors and then FedEx Cup, McIlroy queried whether having players start on different scores was "the best way to do it".

"I get it from a fan experience point of view," he said. "I get it from giving guys that have played better throughout the year an advantage, but I don't know... come back to me on Monday and I'll tell you if it has worked or not."

McIlroy also questions the vast amount of money at stake. "It doesn't need to be about the money, it should be about the prestige of winning an event that you'll be remembered for. Who knows what the winner picks up at The Masters? I don't know because that's not what it's about," he said.

"The money's great but I'll get more satisfaction from winning the golf tournament and playing well. I don't think the money needs to be front and centre because I don't think that's what the fans care about.

"It's definitely a thought that came into my head, 'how can we make ourselves more relatable to the fans?', and having $15m front and centre isn't probably the best way to do it."

Masters champion Tiger Woods and Open winner Shane Lowry both failed to qualify for the top 30. "I want to emphasise the fact that what Tiger and Shane did this year, those are two of the greatest stories of the year. So would you want them here? 1,000%," said PGA Tour commissioner Jay Monahan.

"But you look at every other sport and their play-off format, and you'll have top teams that fall out early. You'll have some things that you may not have predicted, particularly at the moment when they won those two big events.

"You've got to play exceedingly well over the course of an entire season, and, with volatility, there's risk."