IT HAS been a long time coming but American David Lipsky finally won his second European Tour title at the Alfred Dunhill Championship at Leopard Creek in South Africa, shooting a final round of 68 to finish at 14 under, two shots ahead of Scotland's David Drysdale, with Scott Jamieson and Zander Lombard a further shot back.

Lipsky won the European Masters in 2014 in his first season on tour and has contended many times since without being able to finish the job. In the 2018 season he managed just one top-10 finish, which saw him finish outside the top 100 in the Race to Dubai for the first time.

And he was understandably thrilled to secure his playing privileges for two years as a result of this victory.

“It’s indescribable actually,” he said. “Winning is what we all hope to do, it’s what we practise for, it’s what we all put the time in for - the blood, sweat and tears. This was a tough year for me. I haven’t played that well and have really struggled. To cap it off with a win at the end of the year is so special and I’m really looking forward to big things in 2019.”

Lipsky put his approach on the first to two feet to join the lead and took advantage of the par-five second, with a tee-shot to six feet on the par-three fifth edging him three ahead.

Lombard had holed an 18-footer on the first and left himself little more than a pitch into the par-four sixth for a pair of birdies but bogeys on the seventh and eighth left him well back as he turned in 35.

Lipsky put an approach to five feet on the ninth to get to 14 under and while a holed bunker shot on the tenth kept Lombard in contention, Lipsky briefly led by six with another excellent approach to the tenth.

Lombard got within five with an approach to three feet at the 11th and Lipsky then made a first bogey of the day on the 12th. Lombard reached the par-five 13th in two and holed a 20-footer for an eagle, with Lipsky making a brilliant par after going in the water off the tee. It was game on.

The lead was down to one shot after Lombard holed from six feet on the 14th but Lipsky put his approach even closer and regained his cushion. Lombard found water with his second on the 15th but saved par and then put his tee-shot and third in the lake on the par-three 16th for a triple-bogey that ended his victory hopes. That meant the lead was up to four ahead of Drysdale who set the target with a 67. The 43 year old holed a long putt on the fifth, made the most of the short sixth and then holed from the fringe on the ninth to turn in 32.


A bogey on the 11th set him back but he hit an approach to two feet on the 14th and got up and down for a birdie on the 15th.

A lucky bounce out of the trees off the 18th tee then set up a closing birdie for him to get to 12 under and that was soon just one back after Lipsky got in trouble on the 16th. He played away from the hole after finding a plugged lie in a bunker off the tee, missing the green and failing to get up and down to surrender a double.

An excellent two-putt on the 17th sent Lipsky up the last with a one-shot advantage and he reached the treacherous par-five18th in two for a closing birdie and a two-shot victory. Lombard also birdied the last to move alongside Jamieson. The Scotsman was four over for his round after 10 holes but then rolled off four birdies in a row from the 13th before bogeying the 16th and picking a shot up on the last.

Oliver Wilson finished in the top 10 for the first time in four years at the South African Open last week and he repeated the feast after a 68 saw him finish at eight under alongside fellow Englishman Ben Evans, who also carded a 68.

Australian Deyen Lawson made his second hole-in-one of the season with an eight iron from 167 yards on the 16th to win a BMW 850. 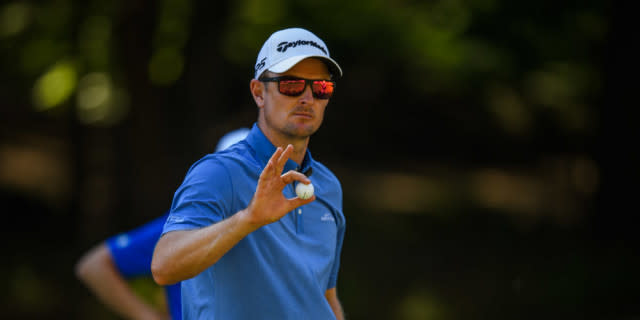 Meanwhile, Justin Rose missed the chance to finish the year as world No1 when he endured a miserable final round at the Indonesian Masters. He went into the final round knowing a top-12 finish at Royale Jakarta Golf Club would see him overtake Brooks Koepka, but he had a 75 and missed out on a tie for 12th by a dingle shot. Thailand's Poom Saksansin finished on 20 under par to win by three strokes. Saksansin won from compatriot Jazz Janewattananond, with Sweden's Henrik Stenson another three shots back on 13 under.

After two rounds of 68 before a 71 on Saturday, Rose was tied for fourth at nine under par heading into the final round and looked well placed to regain top spot. However, the 38-year-old carded two bogeys and a double bogey in his opening five holes, before briefly pulling himself back into contention with birdies either side of the turn.

Rose's round unravelled once more at the par-five 12th, carding a triple-bogey eight and following that up with another dropped shot at 13. He clawed three strokes back in the final five holes, closing out with successive birdies, but that was only enough to secure a tie for 17th place at six under par.