AND so another season on the European Tour comes to an end. It has been quite a 12 months. Europe won back the Ryder Cup in sensational fashion at Le Golf National, Francesco Molinari won The Open, Tommy Fleetwood nearly won the US Open, Tiger Woods led The Open going into the back nine on Sunday and finished second at the US PGA Championship. A host of young English golfers either confirmed their promise or burst through. There are even signs that Danny Willett, finally restored to something like full health, is back to his very best.

Here we produce an end-of-term report, looking at the men who have grabbed the headlines and one or two who may feel that they could have done rather better. There have some incredible success stories. There have also been some astonishing falls from grace.

What can you say about the year Rose has enjoyed? Well, you could say that he failed to win a second major. And that would be true. But he finished second in The Open at Carnoustie - his best performance in his home major. And he won on the PGA Tour and European Tour, successfully defending his Turkish Airlines Open title - it gave him a shot at landing the Race to Dubai, but he chose not to play in the Nedbank Challenge or the Dubai World Championship. That may surprise some, but it proved that he is no longer motivated by money. Oh yes, and he became world No 1, something that was achieved thanks to some incredible consistency. 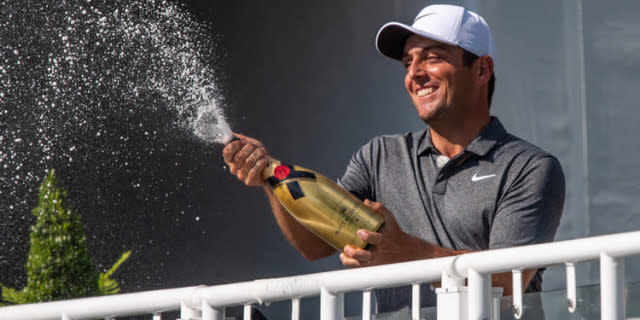 Winning the BMW PGA Championship and securing his first title on the PGA Tour would have been enough for most men. Not Molinari. The little Italian has played like a man possessed in 2018 and it should have surprised nobody when he won The Open at Carnoustie in such astonishing fashion. He has always been one of the world’s best iron players but was held back by a suspect putting stroke. He put all that to bed in Scotland, holing putts from everywhere. He never looked like he was going to miss. And, just for good measure, he then went to the Ryder Cup and secured five points from five.

Fought all year to hang on to his Race to Dubai crown. Fleetwood is now a world-class performer with absolutely no weaknesses. He came within a whisker of overhauling Brooks Koepka at the US Open and it is surely only a matter of time before he lands his first major. The Englishman has developed a happy knack of shooting the lights out around some of the most difficult courses on the planet. Don’t be fooled by that claw grip he uses on the greens - he is a wonderful putter. But perhaps the best club in his bag is the one that he carries between his ears. He has a wonderful temperament and plays the game with a smile on his face.

What a comeback! Barely two years ago he lost his playing privileges and looked like he had also lost his motivation and his desire. But it turned out to the wake-up call he needed. The Englishman has enjoyed a spectacular season and can count himself genuinely unlucky to have missed out on the Ryder Cup. He finally won his first tournament and then went on a wonderful run, producing top-10 finishes for fun. He now believes in himself and looks like a winner. Has a long and bright future ahead of him. He is also one of the game’s good guys.

The 2016 Masters champion has had a wretched time of it. He would be the first to admit that he didn’t handle things terribly well after winning the Green Jacket. But there was no way he could have foreseen the injury misery and loss of form that saw his world ranking fall off a cliff. Many lesser individuals might well have given up. Not Willett. He is a fighter and a survivor. There were many who thought he was making a mistake when he sacked his caddy and swing coach and for a long time it looked like they were right. But, finally free of injury, Willett’s name started to appear on leaderboards once more - and then he went and crowned it all by winning the Dubai World Championship.

You may well ask how somebody who won three times in the one season failed to make it to Le Golf National. Unfortunately, the tournaments that Wallace won did not carry huge prize funds but make no mistake about it - this guy is a serial winner and he is a seriously talented player. He will win more tournaments - lots of them - and don’t be surprised to see him starting to make his mark on the other side of the Atlantic.

The Dane’s talent has never been in doubt. The problem was that while others recognised, perhaps he didn’t. He does not hit the ball into the middle of next week, but he is incredibly consistent and he finds lots and lots of fairways. He also possesses a short game to die for. If Rory McIlroy could putt the way that Olesen does he would have won 10 majors by now. Comfortably settled within the world’s top 50, he is only going one way - and that it up.

Comeback story of the year. He played little golf in the early part of the season and his world ranking began to tumble. There was no way back, or so we thought. But 45-year-old Westwood was determined not to be outdone or outshone by the brilliant group of young English golfers and decided to go away and work on his game. Towards the end of the year he started to look like the Westwood of old, enjoying top-10 finishes for fun. And then came the Nedbank Challenge at Sun City in South Africa, a tournament he had won twice before. He produced a sensational final round to see off the Sergio Garcia and Louis Oosthuizen. There’s plenty of life in the old dog yet.

It was a Ryder Cup year, so of course The Postman was going to deliver again. His goal from the start of the year was to be a member of Europe’s team in France and he all but tied his place down early on when he finally won again on the PGA Tour. He should actually have won a couple times more but couldn’t quite pull it off. In the end, he required a wild card from Thomas Bjorn but he did Europe proud once again, seeing off none other than Dustin Johnson in the singles. An incredible competitor.

OK ok, so he is not a member of the European Tour, but how can you reflect on a season without mentioning Woods? Hands up if you thought his latest comeback was going to be a success….thought so. Most of us closed our eyes and hoped for the best, but Woods defied the odds and rolled back the years. He had us looking on in disbelief when he took the lead during the final round of The Open before eventually coming up short. And then he performed brilliantly at the US PGA Championship, where he ended the week as runner-up. Jim Furyk handed him a Ryder Cup wild card and then he only went and won the Tour Championship at East Lake. He had a Ryder Cup to forget, but so did most of his teammates. Woods is back and looks like he really will add to his tally of 14 majors. The story of the year.

In the end it turned out to be an “almost” year for the Spaniard. He missed the cut in all four majors and will want to forget his defence of The Masters. But something happened to him when Thomas Bjorn picked him as a Ryder Cup wild card. He won three points for Europe, became the leading points scorer and won the Andalucia Masters in front of his home crowd. Yes, he lost the Nedbank Challenge after leading for 54 holes, but that was more to do with the brilliant play of Lee Westwood on the final day than anything that Garcia did wrong. He will head into the new season full of optimism.

Another Spaniard, and one to watch for the future. He won the Belgian Knockout but far more impressive than that was his consistency as the 25-year-old reeled off 11 top-10 finishes. Impressive in everything that he does, Otaegui has improved every part of his game. He doesn’t hit the ball terribly far but he finds almost 70% of fairways and is one of the best in the business when it comes to hitting greens in regulation.

This was meant to be the year he got it all back on track. Yes, he won on the PGA Tour, but he threw away a golden opportunity to win The Masters and although he finished second at The Open he never really looked like winning. At times he has cut a sad, frustrated and forlorn figure. There have, of course, been moments of brilliance, but they have been rare. It is now four years since he last won a major. It is a poor return for a man who possesses such glorious natural gifts. Many will point to his frailties on the greens, but there have been times when his driving has been spectacularly wild. Must do better. Now talking about not renewing his membership of the European Tour. Is he serious?

Had the world at his feet aged 16. Back at qualifying school at 25. He won his first European Tour title when he was still only 17, the youngest person ever to do so. By the time he was 20 he had won four times, including the BMW PGA Championship. He looked like a world-beater. But then he decided that he needed to learn to hit the ball further and starting spending too much time in the gym. He also changed a swing that had served him perfectly. He could probably have survived all of that had he not also lost his putting stroke somewhere along the way. He won all those tournaments because of his touch on the greens, but all of a sudden he couldn’t get the ball into the hole from three feet. And to cap it all off he lost his card and failed to win it back, which means he faces 12 months on the Challenge Tour. It is one of the saddest stories of the year.