During the recent International Confex and Event Production Show at Olympia London earlier this month, innovative and creative Provision Events (PVE) became the first company to showcase virtual reality golf game play at a major event in the UK.

It is the first time the virtual reality concept has been on show in this country at a major trade event and strengthens the company's reputation as one of the markets leaders in it field after featuring the cutting edge, immersive technology alongside their other popular ‘fan zone' experiences.

"It is the first time virtual reality golf has been demoed at an event in the UK as it is brand new technology that has only just come out in the US.

"It went down very well. It is a very cool piece of equipment. We used the golf virtual play at the event but you can pretty much play any sport. The designers can do whatever or however far your imagination will take you." 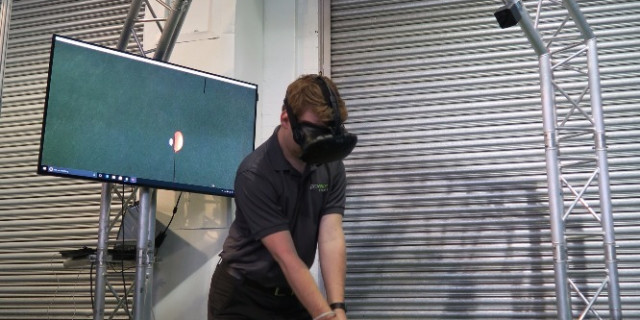 PVE, which deals primarily in golf and tennis ‘fan zone' experiences, is expected to provide its 1,000th event during the course of the year and will be engaged this month at the BNP Paribas Open at Indian Wells from March 9-19, and the Scottish Golf Show at Glasgow's SEC from March 24-26.

Jones added: "These are busy times for us, so as well as the virtual reality golf, we have also upped the quality of our golf simulator. Normally you just walk into a simulator and it is just a simple black cube inside and it is a projected image on the screen, but we have gone beyond that by some way.

"It is visually brilliant. It contains images of golf holes, we have plants, tee box markers, it looks fantastic and the quality and feel is so good."

The International Confex, which attracted more than 7,500 MICE professionals, is the largest gathering of marketing agencies, brands and event organisers in Europe and PVE co-founder Nick Clemens said: "Provision Events has played a huge role at manor major sporting events and that is continuing to grow as does the company.

"Our reputation as the leader in our field continues to push us to look for further improvement and even more creative ideas.

"It means we having to expand our presence at the most prestigious and popular events and this was very evident at Olympia where we had a five-metre stand and some of the most state-of-the-art interactive golf technology on display.

"We have lots planned for this year and will continue to deliver some of the best brand experiences that are on the market."